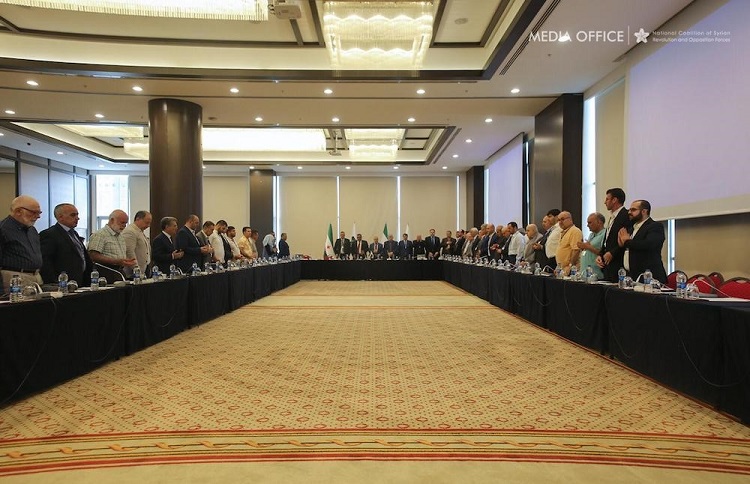 Members of the Syrian National Coalition’s General Assembly have approved the new cabinet of the Syrian Interim Government, SIG, headed by Abdurrahman Mustafa.

The vote came during the General Assembly’s 47th session, which began on Saturday, 31 August. after paying tribute to the victims of the Assad regime’s bombing raid in Idlib and Hama. The participants included a group of the injured and people with disabilities.

SIG’s president, Abdurrahman Mustafa said, “The SIG’s vision is based on the establishment of a civil administration in the liberated areas. This vision will seek to help achieve the goals and strategy of the Syrian revolution; provide a model for the future Syria; and integrate the impact of this civil administration and its output with the Coalition’s political efforts.

Members of the General Assembly discussed the situation on the ground and the bombings by Assad’s regime and Russia targeting residential areas and hospitals in the de-escalation zone, in northwestern Syria.

Since the beginning of the Syrian civil war in 2011, the government of Iran has been actively supporting Bashar-Al-Assad’s government, and the Iranian Revolutionary Guards Corps, IRGC, is thought to be directly involved in killing the Syrian people.
On 30 August, the state-run Entekhab website quoted Ali Saidi, head of the Supreme Leader’s politico-ideological bureau, as saying: In the Islamic world’s geography, Yemen, Palestine, Lebanon, Syria and Iraq constitute Iran’s strategic depth.

The Iranian new government which is composed of Revolutionary...