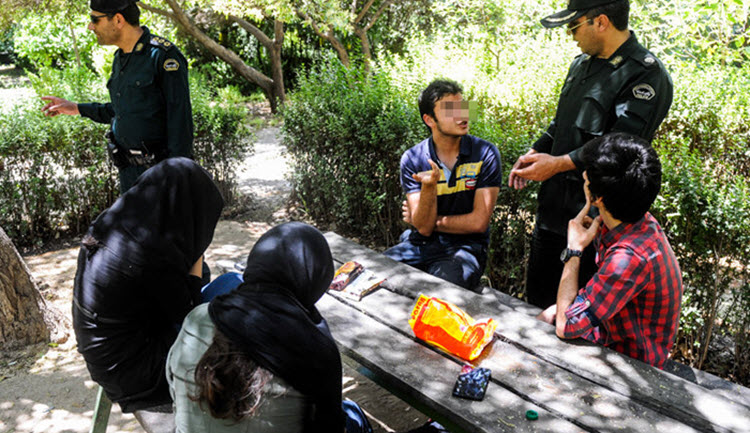 The mullahs’ regime is using Ramadan as its excuse to crackdown on so-called ‘morality crimes’, stating that they want to preserve public security and composure.

The security forces issued a statement emphasising the need to adhere to strict moral codes, avoid displaying a breach of fasting or create noise pollution.

Colonel Salehi, deputy commander of security forces in Khuzestan, said: “[there will be a widespread presence of] tangible and intangible police patrols and vehicles and foot patrols in the city, passages, streets and around religious places.”

He said that it was important to respect the sanctity of Ramadan and advised citizens against dressing “inappropriately” in public places, not observing the fast of Ramadan or creating “noise pollution”.

The prosecutor for Golestan Province said that anyone not fasting during the month of Ramadan would receive 74 lashes.

This is thought to be a response to the recent spate of popular protests.

Mullah Ahmad Zargar, the secretary of the oppressive Promotion of virtue and prevention of vice institute, announced that special branches have been established in justice departments throughout the country including the Court of Justice and the Supreme Court to speed up the processing of morality cases.

He said that directives have been issued for the formations of the specialist councils.
Qom’s Prosecutor Mostafa Barzegar Ganji said: “Plans have been devised [for the security forces] to inspect homes and numerous hideouts.”

In recent weeks, the regime has closed 19 clothes stores in Tabriz, for selling non-permissive clothing, 15 beauty parlours in Alborz province along with the inspection of 1025 guild units.

Trump must work with Iranian Opposition

Iranian charged in export of US military antennas

AP: An Iranian citizen has been charged with a...