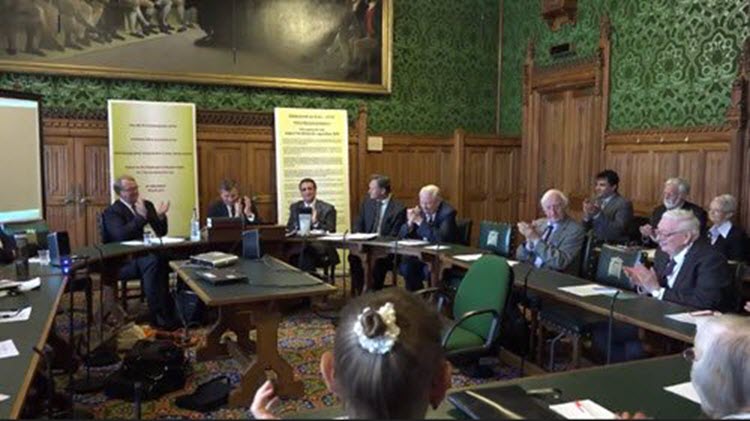 London, 2 Jul – In a press release Thursday, the British Parliamentary Committee for Iran Freedom endorsed the 10-point plan for Iran’s future emphasizing the establishment of a secular democratic republic, free elections, gender equality in all fields, prohibition of discrimination, abolition of the death penalty, and peace and coexistence in the region and the world.

Parliamentarians expressed dismay over recent increases in the number executions in Iran and the use of barbaric punishments such as flogging and amputations by Iranian authorities.

They cited the decay of human rights and the attack on civil society since last year’s nuclear deal as indicating a weakening of the theocratic regime suggesting it indicates the regime feels threatened by the legitimate goals of the Iranian people or the rising levels of popular discontent.

They also described Iran’s continual backing of the Assad regime in Syria as augmenting domestic repression focused on preserving power by theocratic rulers.

Member of Parliament Dr. Matthew Offord said reports of horrendous abuses by authorities “show that neither Rouhani, dubbed a ‘moderate,’ nor other theocratic rulers in the country are interested in concrete and genuine changes that address the actual concerns of the Iranian people, in particular, the youth and women that represent a majority of the population.”

The Rt. Hon. David Jones MP offered an initiative that received supported by almost 400 members of all major parties in both Houses of Parliament. It urges the UK government to take a firm policy towards Iran. The following recommendations are the basis of the policy: strongly denounce human rights violations and demanding a halt to executions; guaranteeing the safety and protection of Iranian dissidents in exile at Camp Liberty in Iraq until they leave Iraq and are received by supporting host countries, especially Albania; enlisting the support of the European Union, the United States, and world leaders to support the 10-point plan of Iranian opposition leader Maryam Rajavi.

Jones also announced the organization of a new All-Party Parliamentary Group for a Free and Democratic Iran (APPG-FDI) as the premier step to advance the recommendations and encourage human rights and democracy in Iran recognizing the critical role played by Iran’s democratic opposition, the NCRI.

The MPs and Peers announced their support for the Iranian Resistance’s annual “Free Iran” gathering in Paris that will be held on 9 July. A large cross-party delegation of MPs and members of the House of Lords plan to attend the rally.

France urges Iran, Syria to work with the world

Reuters: Iran and Syria should not isolate themselves from...