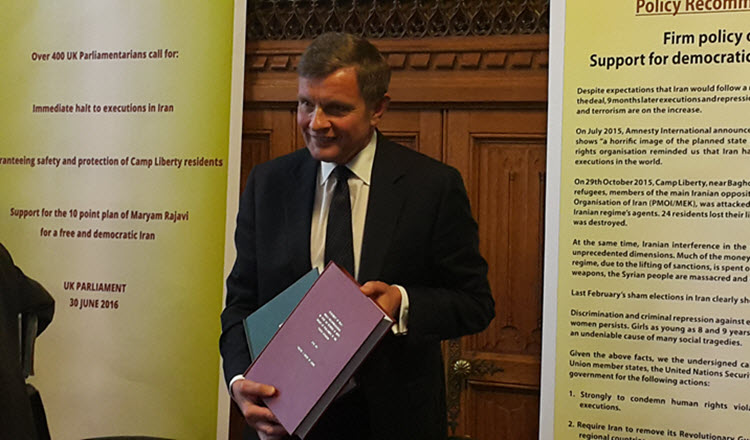 London, 1 Jul – At a conference in the House of Commons on Thursday, June 30, UK policy toward Iran was discussed by a panel consisting of experts on Iranian affairs and parliamentarians from both Houses of Parliament and each major political party, Politics Home reported on Friday.

The parliamentarians expressed their concern over recent increases in the number of executions in Iran, the use of barbaric punishments, such as flogging and amputations by Iranian authorities, and arbitrary arrests under bogus charges like undermining “national security” or “Mohareb (enmity towards God)“.

Speakers pointed out that the intensified crackdown on civil society, suggest that the regime has no other answer to the legitimate democratic aspiration of the Iranian people or the increasing levels of popular dissent.

The Rt Hon David Jones MP presented an initiative supported by nearly 400 members of all major parties in both Houses of Parliament. The initiative urges the UK Government to adopt a firm, responsible policy towards Tehran. It laid out the following recommendations as the base of such policy:

2. Requiring Iran to remove its Revolutionary Guards and mercenary forces from other countries, especially Syria and Iraq.

3. Guaranteeing the safety and protection of Iranian dissident exiles residing at Camp Liberty until they all depart from Iraq and reach supporting host countries, especially Albania.

4. Calling on the EU, US and world leaders to support the 10 point plan for the future of Iran, presented by the Iranian opposition leader, Maryam Rajavi, which emphasises the establishment of a secular democratic republic, free elections, gender equality in all fields, prohibition of discrimination, abolition of the death penalty, and peace and coexistence in the region and the world.

In her message to the conference, the President-elect of the National Council of Resistance of Iran (NCRI), thanked the MPs and Peers for their initiative and support and said, the Supreme Leader “Khamenei and other leaders of the regime have acknowledged that if they do not fight in Syria, in Iraq and in Yemen, their power base in Tehran would be undermined. This explains why Iran’s ruling regime has turned into the main source of instability in the region … Because the mullahs’ warmongering in the region is contrary to the highest interests of the Iranian people, prevents Iranian Resistance from establishing freedom and democracy in Iran, and has also destroyed the Iranian economy.”

Struan Stevenson, a former MEP who chaired the Friends of a Free Iran intergroup (caucus) in the European Parliament for over 10 years, added: “Iran cannot be part of the solution to the conflicts raging in Iraq, Syria, Yemen and Libya. It is part of the problem. Iran exports terror … the West should be entering into dialogue with the political coalition that is the National Council of Resistance of Iran (NCRI), rather than pussyfooting around with the mullahs in Tehran”.

A delegation of British MPs and Members of the House of Lords plan to attend the Iranian opposition’s annual “Free Iran” rally in Paris on 9 July.

Iran ayatollah is poster boy for influence in Iraq

AP: After years of growing influence, a new sign...

By Jubin Katiraie An Iranian man has pled guilty...