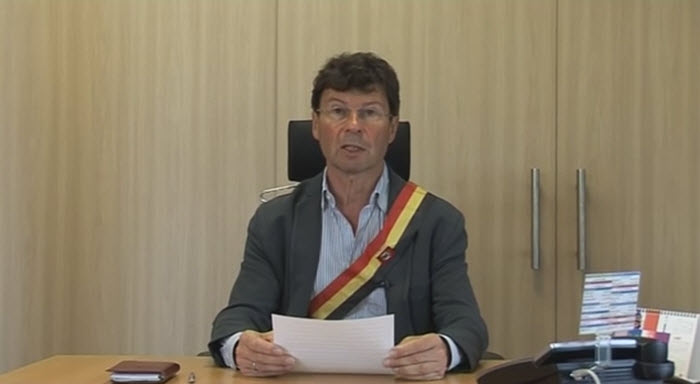 Brussels, 19 Jul – More than 90 Belgian Politicians on today, 19 July, called for relations with Iran to be predicated on an improvement in their human rights situation.

In a video of the remarks by Dirk Claes, Mayor of Rotselaar, Honorary Senator, and President of Belgian Committee of Parliamentarians and Mayors for a Democratic Iran, we hear about the Belgian peoples’ concern over human rights violations in Iran, which have degenerated under the regime of President Hassan Rouhani. Under this so-called ‘moderate’ leader, women are being ever more repressed, and journalists have been sent to prison, among many other abuses.

Additionally, even after the nuclear deal was passed last year, Iran has fired long range ballistic missiles, and is sponsoring terrorism with its support of Bashar Assad in Syria.

Claes praises the huge gathering in held in Paris, “Free Iran”, on July 9, by the Iranian resistance, the National Council for the Resistance of Iran (NCRI) and its president- elect, Maryam Rajavi, who has been to Belgium Senate and parliament several times. He states, “This meeting has really shaken the regime”.

In solidarity with the people of Iran who are suffering under the rule of the mullahs, a joint statement, supported of many members of parliaments from major political parties from both the French and Flemish speaking communities in Belgium has been issued. The statement was released to the media today.

“Our main demand is that the European governments including our own government in Belgium, must condition their relations with Iran to end of executions and a clear progress on human rights. We should not close our eyes to the crimes in Iran for financial interests”, Claes concludes.

Biden: Israel free to set own course on Iran

In less than a week, the Islamic Republic will...