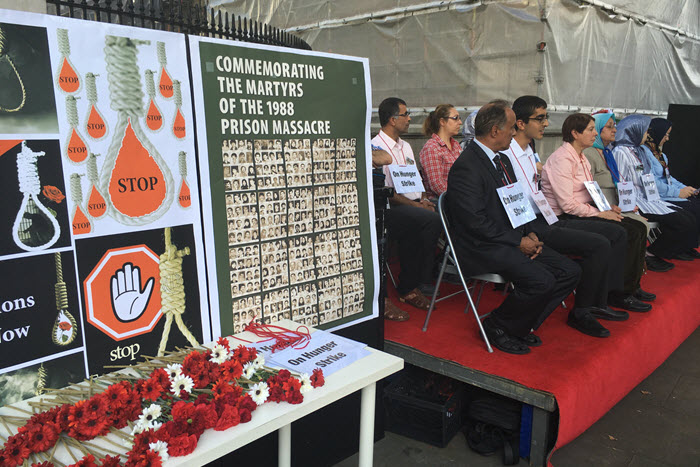 London, 6 Jul – In response to recent executions of 25 political prisoners in Iran under the rule of Hassan Rouhani, Anglo-Iranian activists are calling on the UK government and its Western allies to categorically condemn these acts and halt the torture taking place in Iran by staging a 3-day hunger strike outside Downing Street this weekend.

The number of executions in Iran under the presidency of Hassan Rouhani is on a shocking rise. So far, 2,500 people have been hanged under the presidency of Hassan Rouhani. One of the campaigners, Ahmad Ebrahimi, whose friends and family members have died at the hand of the Iranian regime, warned that the international community must become more involved and help put an end to deaths. He believes the death toll has increased in the last 10 years, a fact supported by Ahmed Shaheed, the UN special rapporteur for human rights in Iran, who claimed in March 2015 that “the overall situation has worsened” with regard to human rights in Iran. According to his report, in 2015 the number of unlawful executions had risen 10 times compared to 2005.

The activists are also calling on the UN Human Rights Council and the UN Security Council to form an international court to prosecute the officials of the regime responsible for these crimes.

The recent mass execution was slammed by the National Council of Resistance of Iran (NCRI) which is hoping to use the hunger strike in Whitehall to pressure the Foreign Office to openly criticise it.

The protest also takes place 28 years after the execution of potentially tens of thousands of dissidents by Iranian authorities.

As well as achieving support from the UK government, the campaigners also hope to secure a similar missive from the UN Security Council and UN Human Rights Council.

Hossein Abedini, a spokesman for the Iranian organised Resistance, told metro.co.uk: that there is a lot of concern a similar execution to the one in 1988 could take place.

‘The situation in Gohardasht and other parts of Iran has really worsened,’ he said.

‘I think its really very important [we get UK Government support] because a large number of MPs and Lords recently issued a statement and calling for cross-party support concerning Iran.
‘There is a lot of concern about the brutal hangings and torture.

‘It very important the massacres of 1988 are recognised as a crime against humanity and that very robust measures are now introduced.’

DPA: In the harshest reaction so far made on...