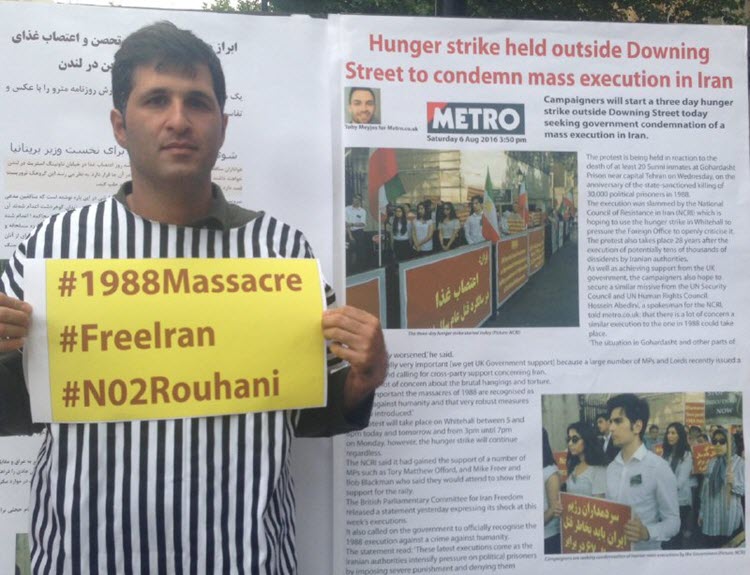 The Independent, an influential British newspaper, today reported on the culmination of a series of demonstrations to mark the Iranian regime’s widespread and increasing use of execution against political protestors.

Protesters staged a mock execution as they entered the final day of their hunger strike outside Downing Street. The National Council of Resistance of Iran (NCRI) is calling on the UK government to acknowledge the executions and human rights abuses in Iran, Caroline Mortimer reported.

Anglo-Iranians and British supporters were drawing attention to the more than 2,500 people they say have been hanged in the country since the start of Hassan Rouhani’s presidency in 2013.

Conservative MP Matthew Offord offered his support to the protesters in the light of “the horrific events we have seen happening in Iran over this past few weeks. The mass execution of Sunni political prisoners is deeply disturbing.”

The MP told The Independent he had recently spoken at a rally of “over 100,000 people who attended the annual National Council for Resistance in Iran conference in Paris.” He pledged the he and his fellow parliamentarians would continue to stand with the Resistance.

The NCRI, which organised the protest, said: “The hunger strikers and protesters are urging the UK government to categorically condemn the cruel hangings that are taking place unabatedly in Iran and act with its Western allies to press for an immediate halt to the executions and torture in Iran.”

The NCRI also called on the UN Human Rights Council and the UN Security Council to “refer the human rights dossier of the mullahs’ regime to the International Criminal Court for the prosecution of its leaders including the Supreme Leader Ali Khamenei and President Hassan Rouhani.”

The Anglo-Iranian protests began on the anniversary of the massacre of around 30,000 political prisoners across Iran in 1988. Khomeini had designated them, in a secret fatwa, as “at war with Allah.” Most were members of the People’s Mojahedin Organization of Iran (PMOI or MEK), the largest grouping in the NCRI, said The Independent.

Maryam Rajavi, President-elect of the NCRI, described the 1988 massacre as an “appalling crime against humanity,” and said it was time for the UN “to end their silence and bring the record of the Iranian regime’s crimes before the International Criminal Court,” the newspaper reported.

This just in: Rally in west Tehran