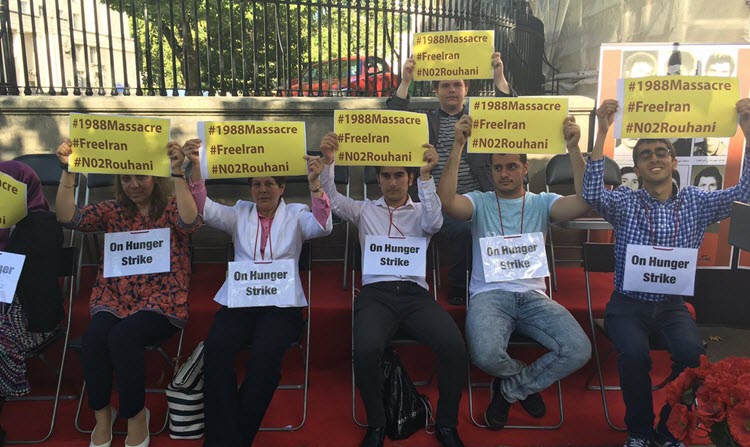 London, 10 Aug – A group of protesters in the UK staged a three-day protest and hunger strike last weekend, to show solidarity with the political prisoners currently held in Iran and to commemorate those murdered by the Iranian regime in early August.

The relatives of the victims were told they could have one final meeting with their loved ones and when they turned up, they were told that the executions had already happened.

Hossein Abedini, the UK spokesperson for the National Council of Resistance of Iran (NCRI), said: “The situation inside the prison where the recent executions took place is very worrying and many people, many prisoners are on hunger strike there and there is very tight security. There is a very worrying situation if the silence continues and robust measures are not introduced immediately.”

The protesters gathered outside Downing Street to demand that UK politicians speak out against the treatment of political opposition members in the theocratic state, wanting to bring awareness to a cause often overlooked by the West.

The Association of Iranian Political Prisoners, UK, said in a statement: “The participants urge the UK government to categorically condemn incessant cruel hangings and act with its western allies for an immediate halt to the executions and torture in Iran. They also call on the UN Human Rights Council and the UN Security Council to form an international court to prosecute the officials of the regime responsible for these crimes.”

They also called for the government to recognise the victims of the 1988 massacre in which 30,000 political prisoners were killed in a series of mass executions. The protesters want international governments to hold the perpetrators, who are still high-ranking members of the Iranian Regime, to be brought to justice.

Omid Ebrahimi, an 18-year-old who took part in the protest, cited his parents as his inspiration for doing so.

Ebrahimi said: “My dad was very active in Iran and spent 10 years in prison there. He was there at the time of the 1988 massacre and whenever he talks about the memories he had and the friends he had that were taken from him and executed during this massacre I am astounded.”

He added: “Four of my mum’s relatives were executed by the regime – two during the massacre – and all of this motivates me to follow in the footsteps of my parents, because they are trying to raise awareness of the fact the regime is still there – many high ranking members who took a leading role in the massacre still hold key positions in the hierarchy of the regime.”

Most of those involved with the protest, which included an exhibition of the regime’s human rights abuses and a mock execution, had relatives who were imprisoned or killed by the mullahs.

Naghmeh Rajabi, 29, spoke to IBTimes UK on the third day of her hunger strike. She said: “It is personal because I was a victim of the Iranian regime. My aunts were executed by the Iranian regime and I never got to meet them and it’s a personal thing for me. Living in a free society as an Iranian woman in exile, it is my responsibility to speak for the women who don’t have a voice and don’t have the basic minimum human rights.” 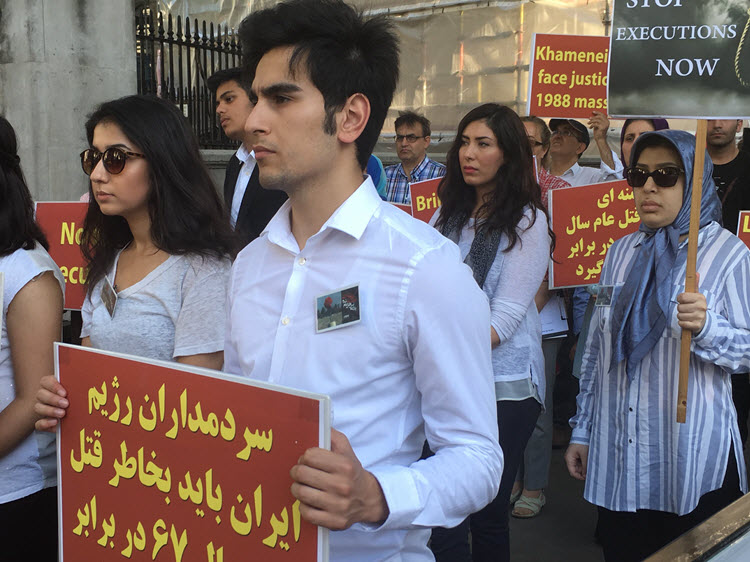 Despite their hunger-strike, Ebrahimi noted that the protesters were doing well in comparison to Iran’s political prisoners.

He said: “We are on hunger strike with political prisoners who are also on hunger strike, but they are in worse conditions. They are tortured they are awaiting executions and we are doing it in a country where we are out of harm’s way and we are not under threat.”

Washington Post: George Bush may have triumphed at home,...

The U.N. Expressed Concern Over the Rising Number of Executions in Iran