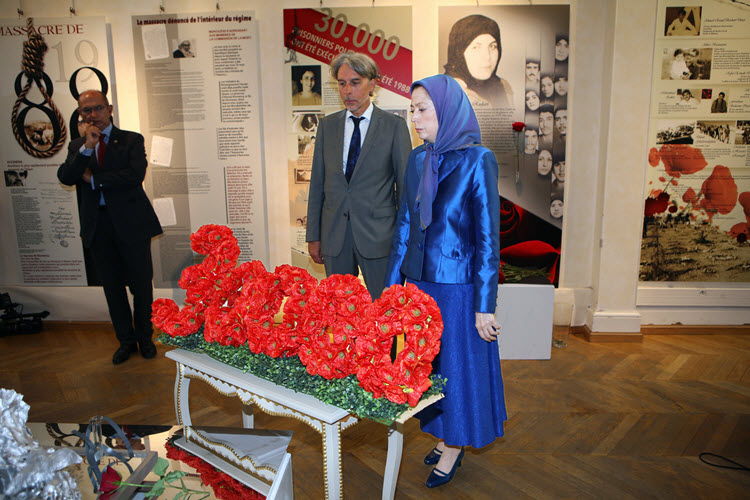 London, 26 Aug – The leader of the Iranian opposition has stated that an international inquiry into the 1988 massacre of political prisoners in Iran, is essential to bring the perpetrators to justice.

A statement from Paris Municipality 2nd District about the exhibition read: “This exhibition especially commemorates the sad anniversary of the massacre of some 30,000 political prisoners during the summer of 1988 in Iran. This terrible episode in modern history is now back on the front burner with the revelation a few days ago of an audiotape recounting conversations that occurred at the highest level with those directly responsible for the killings.”

On August 24, the President of the National Council of Resistance of Iran paid tribute to the fallen soldiers of the French Resistance and victims of the Nazi occupation; comparing their sacrifice to that of the People’s Mojahedin Organization of Iran (PMOI) forces. She urged the UN to bring the war criminals to justice.

These feelings were echoed the politicians in attendance with Jacques Boutault, mayor of Paris’s 2nd District, stating that executions within Iran should be halted.

Boutault said: “Our borough today commemorates the liberation of Paris, which ended four years of occupation by Nazi Germany. If European countries were able to sustain the end to the dictatorship, it is because they have the ability to remember the past so it would not be repeated. This unspeakable episode in Iranian history would only result in a continuation of what is unspeakable. That is why the town hall of the 2nd District is honored to host this exhibition and listen to the witnesses of this inhuman episode in Iranian history. “

AFP: The head of the UN atomic watchdog, Mohamed...