Iran: Irony of a judicial system in a religious fascism. 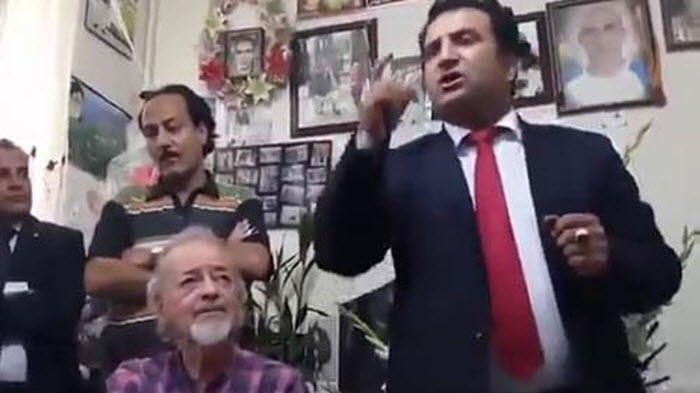 London, 31 Aug – A video clip released via the internet appears to show Iranian attorney, Mohammad Najafi, addressed a group of people about the crimes taking place under the mullah’s regime.

The footage appears to show a birthday party at the home of Sattar Beheshti (a dissident blogger who was tortured and killed by regime officials in 2012), according to the National Council of Resistance of Iran (NCRI).

Najafi said that the 1988 massacre laid the foundation for “lawlessness” and the fear of questioning the law of the Islamic Republic.

He said: “The same bad foundation that we laid occurred in the “chain murders” [in the 1990s, at least 120 dissidents, writers and intellectuals were abducted and brutally murdered]. No one was held accountable, because since the beginning of the chain murder cases, officials explicitly said that they deserved it. I mean that fatwas were issued by religious leaders that these men deserve death and should be killed. Exactly the same method was used in 1988 massacre and in University alley [killing of the students on campus] … and in murders of 2009 uprising and in recent killings when our Kurdish brothers were executed and some people said that legal procedures were not followed.”

The question is, that if Iran does not follow its own laws; how can anyone be expected abide by them? The legality of actions appears to be determined by the will of the powerful rather than the rule of law.

Nonaligned nations prepare to back Iran