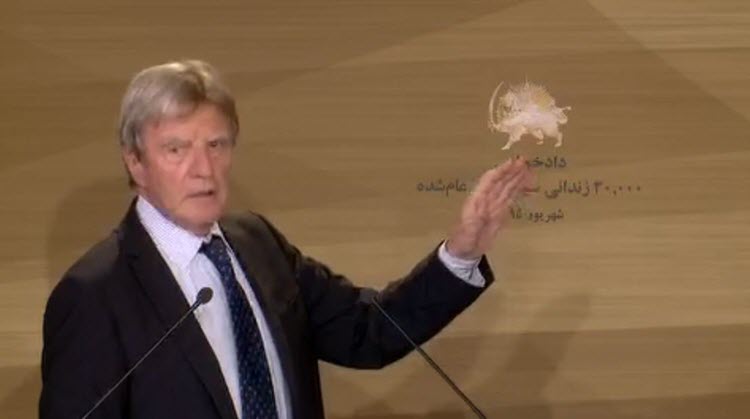 He acknowledged that he is a human rights activist, but said, “after hearing, reading the documents you sent me, and after having heard Sir and Mrs., I wonder what were the human rights activists doing during all that time. I know some are really brave. I know there have been people protesting, but only a few, not enough, when those abuses happened. “

He continued, “There is always this state policy I had to fight all my life, that makes it easier to leave the stones unturned, rather than turning them to see the blood that nourishes the earth. I know the state policy demands silence,” he added, “…we realize we were wrong to keep quiet. And then we realize that the situation of the mullahs succeeding to the Shah of Iran wasn’t quite clear.

He admittted, “Certainly, the balance in the area was fragile, and it still is. But step by step, we forgot, we wanted to forget what was happening in Iran. And there were other problems, there was the Iraq-Iran war, and there was the situation of all the protagonists of the region, and even from further countries, like the USA, or Europe, and the nearby countries. So we kept quiet.”

“Some groups protested in the streets, but not many. And now, we realize the result of the 1988 massacre. 33,000 people. And we wonder what the International Criminal Court in The Hague, or all the courts which were formed about specific massacres, in specific countries, like the Russell Tribunal and the tribunals about massacres in Rwanda, in Lebanon, etc. And we absolutely need the creation of a specific court, to avoid being told that the massacres happened too long ago and that’s it’s too late, there’s prescription.”

He pointed out that, “We need a specific court to judge the mullahs’ crimes. We need… Dear friends, I hear you applaud when I say something, but it’s easy to applaud. But taking actions is harder. It’s very difficult because the obstacles standing in our way… international community… we always refer to the international community. But what is it? What did the international community the UN do? I was for a long time a UN representative, and I was in charge of several countries,” and continued, “The international community sadly, has to take into account influences and political stakes, and the balance of powerful countries. So, regarding this new court, every one of you, and your friends, will have to remind people of what happened from the 80s until this day, and announcing, like Mrs. Rajavi previously said, how many massacres happened last month, not only in 88. Last month. How many hangings? How many executions? Execution rates are calculated per capita, which a pretty gruesome statistic, well, Iran is at the top of the list. And it killed even more people since the signature of the agreement, between, not only the USA, but also Europe with Iran.”

He said that he believes that we all want stability. “… in the most unstable region in the world, the Middle East. Everything that influences just a little… and it’s true that these days, with everything happening in Syria, in Iraq in Turkey and nearby, and the fight between Sunnites and Shiites. Because it’s happening. Saudi Arabia exists too. It exists, and during your conference in Le Bourget, a Saudi speaker explained things pretty well. Some can. All these obstacles will always be there, ahead of us.”

He says we must demand a tribunal, and that he’s counting a lot on Hillary Clinton to join the fight. “I hope I’m not wrong. I know I’m not wrong. So, go for it! He seems to agree, so… I worked for a long time with Hillary Clinton, and… I know she will be the next president of the United States, and I hope that the general configuration will move towards human rights, and the end of massacres.”

“… I learned that 25 of them (Kurds) had just been executed in Iran. Kurd people. In spite of all that, we need to persevere to shed light on this massacre. We need to know that this religious power, this theocracy we hate, is up to. This mix between the good Lord and the Republic, or so-called Republic. Or at least, shed light on the political power and the religion, the inequality between men and women, everything we hate.”
He says, “Nothing changed since the agreement, and I’m not saying I was against it. Because if someone ask you to choose between a possibility of peace, or a possibility of nuclear war, obviously we prefer peace. In spite of all that, we need to know the daily reality. Everybody rushes to sign contracts in Tehran. And then we realize we signed contracts with the Revolutionary Guards.”

“We realize that the economy is in the hands of the Revolutionary Guards. In spite of all that, or maybe thanks to all that, human rights activists who were feeling down lately because, you have to realize, being a human rights activist isn’t trendy anymore. Doing protests in Paris because of the massacres in Syria or elsewhere isn’t in vogue anymore. Sadly, there hasn’t been any big manifestation, and sadly, the way some European countries including mine, didn’t offer shelter to refugees, adds even more sadness, to the human rights activists. In spite of all this, we need to use this opportunity because it’s something we owe to the people who died,” he said, adding, “They’re the reason we have to act once more, and they won’t let us forget all the human rights violations. Their sacrifice is a reminder, their names shall be repeated, and we shall say each time, that we owe our hope to them. Thank you for not forgetting them, and thank you for reminding us of the necessity of this everyday battle we have to give in the name of those who died, but a battle we also have to fight against ourselves. We can’t let the human rights idea die.”