The heart-breaking letter of a political prisoner from Iran 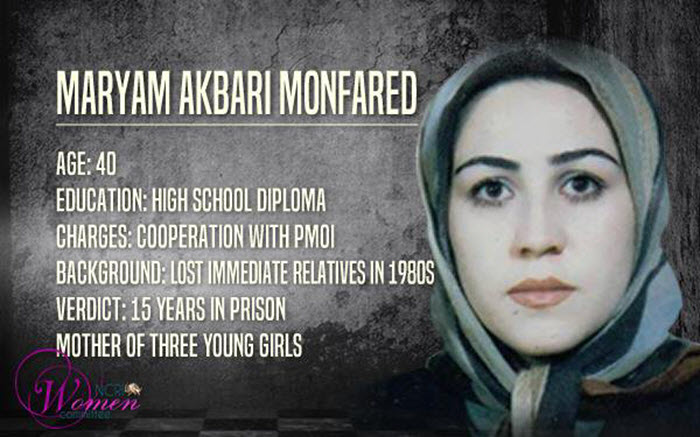 London, 7 September – The heart-breaking letter of a political prisoner has, this week, been smuggled out of the notorious Evin Prison.

Maryam Akbari Monfared writes about sacrificing her freedom to try and ensure a better life for her daughter and the children all over Iran.

Her daughter, Sara, who is now coming up for 11, was only three when Monfared was arrested for opposing the tyrannical rule of the mullahs.

Sara now requires an operation and her mother would understandably want to be by her side but the regime will not allow it. Monfared was also denied leave to see her daughter’s first day of school in 2011.

Monfared wrote: “I feel ashamed because my dear sisters and brothers have left behind their loved ones, to free their enchained nation and to realize an exalted cause in which they believe. They have left their children and have not seen any of the beautiful moments of their growth. And so many of them died before even seeing their beautiful children. And now I am thinking of being by Sara’s side.”

She notes that Sara is well cared for by her father and sisters but the refusal of the Iranian authorities to allow a mother to visit her daughter in the hospital, shows the smaller acts of evil that they intentionally torture prisoners of conscience with.

Monfared recalls the massacre of 1988 in which her sister, Roghieh, and brother, Abdi, were two of those murdered by the government. Two older brothers, Alireza and Gholamreza were also killed by the regime in 1981 and 1985 respectively.

She wrote: “Roghieh’s death was more difficult for my mother that the deaths of her three sons, since Roghieh had a small daughter. Mahnaz was only three years old when Roghieh was arrested. Almost the same age as my own Sara. When I think of Roghieh, I think of what she was thinking of Mahnaz, when she said no to the oppressors. And now here I am, Roghieh’s sister, worrying about my daughter’s operation.”

She said that although the thought of not being there for Sara is painful, she knows that she made the right choice if by sacrificing her relationship with her daughter, she can improve the world that Sara grows up in.

She wrote: “I believe it is the duty of every freedom-loving human being to recognize the savagery of his/her time and stand up to it.”
Excerpts from her letter were published on the National Council of Resistance of Iran (NCRI) website.

AP: In a brazen daylight kidnapping, gunmen snatched a...