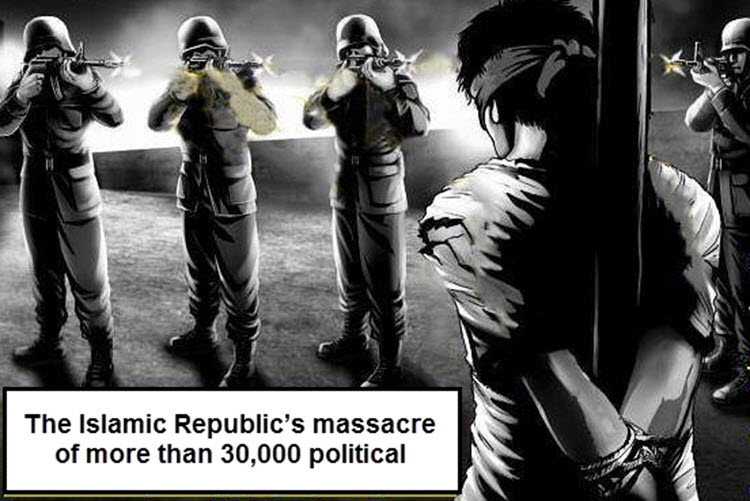 London, 9 October – In an article by Dr. Majid Rafizadeh, an Iranian-American political scientist and Harvard University scholar, and president of the International American Council,he writes about the resolution that is being introduced by the House Homeland Security Chair, Mike McCaul, and cosponsored by Chairman Ed Royce, Ranking Member Eliot Engel, and Rules Committee Chair Rep. Sessions.

The 1988 Massacre in Iran30,000 political prisonershas attracted the attention of the national and international media outlets, and there have been many protests by human rights and political activists because no legal actions have been taken by the International Criminal Court (ICC), the United Nations or human rights organizations to hold Iranian leaders accountable.

This new resolution by the US Congress gives hope to the families of victims who were hung, shot and buried in mass graves.  McCaul quotes late Hussein Ali Montazeri, a grand ayatollah who served as Khomeini’s chief deputy, when he called the Islamic Republic’s massacre “the greatest crime committed during the Islamic Republic, for which history will condemn us”.

The new resolution states, “Condemning the Government of the Islamic Republic of Iran for the 1988 massacre of political prisoners and calling for justice for the victims. Whereas over a four-month period in 1988, the Government of the Islamic Republic of Iran carried out the barbaric mass executions of thousands of political prisoners and many unrelated political groups; Whereas according to a report by the Iran Human Rights Documentation Center, the massacre was carried out pursuant to a fatwa, or religious decree, issued by then Supreme Leader Ayatollah Ruhollah Khomeini, that targeted the People’s Mojahedin of Iran (PMOI), also known as the Mujahedeen-e-Khalq (MEK)”.

It consists of two crucial parts: one sheds light on the crimes committed by the Islamic Republic of Iran. It references Amnesty International and other credible sources. According to a 2007 report by Amnesty International, “between 27 July 1988 and the end of that year, thousands of political prisoners [in Iran], including prisoners of conscience, were executed in prisons nationwide.”

A judge from Iran’s Ministry of Intelligence and a government prosecutor (known as the “Death Commissions”) ordered the elimination of opponents.  Many of those responsible are currently serving in government and financial positions in Iran. For example, Mostafa Pourmohammadi, a representative of the intelligence ministry to the notorious Evin prison, was recently appointed by president Hassan Rowhani to be justice minister. Ebrahim Raeisi was a public prosecutor and is appointed under Rouhani government to be the head of Astan Quds Razavi, which has billions of dollars in revenues.

The procedures for the executions proceeded very fast,and some of those who were executed were teenagers and even pregnant women. Prisoners “were executed in groups, some in mass hangings and others by firing squad, with their bodies disposed of in mass graves”.  Many members of the Baha’i faith were reportedly tortured. The authorities did not inform their loved ones about their whereabouts.

The second part lays out concrete steps and recommendations to be followed in order to hold the Islamic Republic accountable. “Resolved by the House of Representatives (the Senate concurring), That Congress— condemns the Government of the Islamic Republic of Iran for the 1988 massacre, and for denying the evidence of this manifest set of crimes against humanity,” it says.   It also urges “the Administration and United States allies to publicly condemn the massacre, and pressure the Government of Iran to provide detailed information to the families of the victims about their loved ones and their final resting places,” and also asked that  “the United Nations Special Rapporteur on the human rights situation in Iran and the United Nations Human Rights Council to create a Commission of Inquiry to fully investigate the massacre and to gather evidence and identify the names 15 and roles of specific perpetrators with a view towards bringing them to justice”

If similar resolutions are enacted by other governments, and members of the United Nations, Iranian leaders will be pressured to provide more information.

“In addition, the United Nations Special Rapporteur on the human rights situation in Iran can play a crucial role, by opening a full investigation to hold those officials accountable,” says Dr. Rafizadeh, adding that, “if the West truly stands for social justice, liberty and democracy, Iran-West and Iran-US relations should not be primarily anchored in tactical and geopolitical landscapes, but should focus more fundamentally on human rights issues.”

The Iran Regime Did Not Spare Even Children or Pregnant Women