Iranian Resistance calls on release of those arrested at Pasargadae 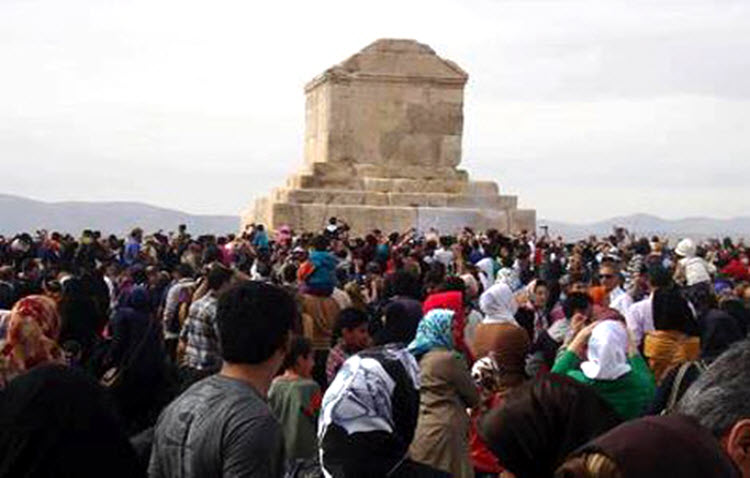 London, 2 November – On Friday 28th October, thousands of people from all over Iran took part in a protest against the clerical regime’s policies in Pasargade – the site of the tomb of Cyrus the Great on the occasion of his birthday. The Iranians at the protest described him as the “pride of every Iranian and a foundational figure in the establishment of human rights principles” said the NCRI (National Council of Resistance of Iran).

However, during the demonstration many people were arrested with state-run media calling the popular annual gathering a move against the mullahs’ regime. Protesters chanted: “Death to the dictator” , “Let go Syria, think (take care) of us”, “No to Gaza, No to Lebanon, My life only for Iran”, “Merciless commander (General) has plundered Iran”, “freedom of thought, impossible with the mullahs” and “The clerical regime, only oppression, only war”.

Ali Salehi, the criminal prosecutor of the mullahs’ regime in Shiraz, said on 31st October that demonstrators had been arrested: “The actions of these individuals had been monitored by security, intelligence and police…Leaders and main ringleaders of the rally that chanted disturbing and anti-values slogans were arrested… judicial files have been formed for these individuals…and they will be dealt with necessary judicial procedure.”

Mullah Noori Hamedani, one of the regime’s clerics in Qom, complained about the event saying that “despite being alive, we once again only sat and watched” what he called “counter-revolutionary” participants. He said: “These are a bunch of counter-revolutionary people and I wonder how they are allowed to gather in the tomb of Cyrus and chant the same slogans for Cyrus as we do for our supreme leader, and once again, despite being alive, we are only sitting and watching.”

The Iranian Resistance called on all Iranians people – especially the young people – to protest against the arrests that have taken place. The NCRI also called on the Iranians to “show solidarity with the families of arrestees” and “calls all international authorities advocating human rights to take immediate action to release the detainees”.

BBC News: The unearthing of nuclear facilities in Iran,...

Iran ready to resume gas flow to Turkey by Tuesday