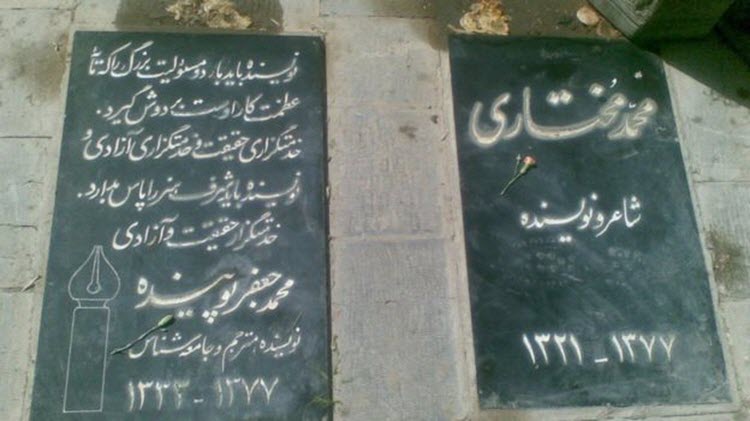 Tehran, 6 Dec – Amnesty International has called for the immediate release of four mourners arrested at a ceremony commemorating the lives of writers slain by the Iranian Regime.

On December 3, plainclothes Intelligence Ministry agents stormed the memorial service of Mohammad Mokhtari and Mohammad Jafar Pouyandeh; they prevented access to the Emamzadeh Taher Cemetery in Karaj, then attacked and arrested mourners.

The four detained, Baktash Abtin, Fatemeh Sarhadizadeh, Mohammad Mehdipour and Mazdak Zarafshan, are being held in an undisclosed detention centre.

Eyewitnesses report that they saw Mazdak Zarafshan being beaten by seven or eight intelligence officers, “until his face was covered in blood”.

When Mazdak’s elderly father, Naser Zarafshan, a prominent lawyer and human rights defender, attempted to stop the attack on his son, officers beat him to the ground too.

Naser Zarafshan was originally arrested but then released.

The agents specifically targeted anyone who was holding a phone, in case they were recording the violent attack, even down to Fatemeh Sarhadizadeh, a 75-year-old woman, who was answering a phone call.

In their statement, Amnesty International made this plea: “[We are] urging the authorities to release Baktash Abtin, Fatemeh Sarhadizadeh, Mohammad Mehdipour and Mazdak Zarafshan immediately and unconditionally as, according to the organization’s information, they have been detained merely for peacefully exercising their right to peaceful assembly. The organization appeals to the authorities to shift its approach radically so that it focuses on remedying past crimes, such as the murders of writers and opposition figures in 1998, by ensuring that all those involved are brought to justice in fair trials rather than violating the rights of those seeking to pay homage to the memory of the victims.”

Mokhtari and Pouyandeh are believed to have been murdered by agents of the Intelligence Ministry in 1998.

Reuters: Iran said on Tuesday it would continue enriching...

Reuters: The United States said on Friday that what...