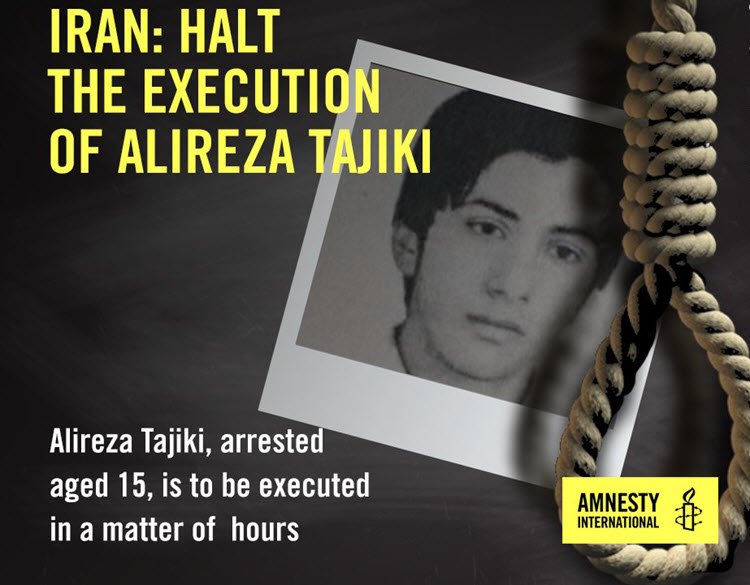 London, 12 Aug – Amnesty International has condemned the Iranian Regime’s “shameful” execution of a man arrested and sentenced to death at 15.

Alireza Tajiki, who reported that he was tortured into confessing, was executed on Thursday, August 10. He was the fourth person, arrested as a child, to be executed in Iran so far in 2017.

Amnesty International reported that this is part of a horrifying pattern where children are sentenced to death in Iran after grossly unfair trials.

Tajiki was arrested in May 2012 and convicted in April 2013 of the rape and murder of a man, but again, his “confession” was extracted via torture, including severe beatings, floggings and suspension by the arms and feet.

Aside from the “confession”, there was little evidence linking Tajiki to the crime.

Amnesty International’s Deputy Director for the Middle East and North Africa, Magdalena Mughrabi, said: “By going ahead with this execution in defiance of their obligations under international law, and despite huge public and international opposition, the Iranian authorities have again cruelly demonstrated their complete disdain for children’s rights. This shameful act marks a critical turning point for Iran, and exposes the hollowness of the authorities’ claims to have a genuine juvenile justice system.”

In 2013, the Iranian Regime introduced some piecemeal reforms to their so-called justice system in order to deflect criticism of their execution record of juvenile offenders. These reforms allowed judges discretionary powers to replace the death penalty with an alternative punishment for people under the age of 18 when they committed a crime, if the defendant has not reached “mental maturity”.

Despite this new law, dozens of young people are still being sentenced to death, in clear violation of international human rights laws.

Mughrabi continued: “This execution is a flagrant violation of Iran’s obligations under the UN Convention on the Rights of the Child, which it ratified two decades ago. By putting Alireza Tajiki to death, the Iranian authorities have demonstrated their appalling commitment for continuing with this abhorrent practice and shown they do not even have the will to implement their half-hearted reforms to save the lives of those convicted as children.”

Iran is one of the only countries in the world that still executes juvenile offenders.

As of August 2017, Amnesty International has identified at least 89 people on death row in Iran who were convicted whilst under the age of 18 but the number could be much higher given the secrecy around the Iranian Regime’s prison system.