Trump Should Tackle Iran on Human Rights at UNGA 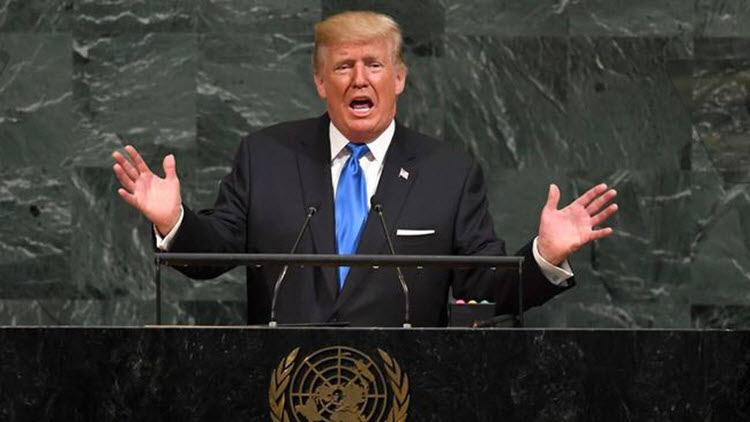 London, 19 Sep – If Donald Trump truly wants to target the Iranian Regime, he should aim for their sore spot-their human rights record- according to one journalist.

Peyvand Khorsandi wrote an op-ed for The Independent, entitled “This is what Trump should do about Iran at his first UN General Assembly meeting”, in which he explained that Iran’s long history of human rights abuses is their Achilles heel and by targeting that, he can help bring the Regime to its knees.

There is just over a month until Trump must decide whether Iran is compliant with the nuclear deal (hint: it’s not) and he has still not revealed the US policy on Iran, despite many rumours about the contents.

Khorsandi advises that Trump listens to Secretary of State Rex Tillerson’s June statement on Iran in which he describes Iran’s human rights record as “one of world’s worst” and points out that any political opponents are imprisoned or murdered.
Khorsandi wrote: “Nearly 40 years after its inception, the Islamic Republic fears freedom of speech and ideas just as it did on day one under Ayatollah Khomeini, the mother of all Islamic extremists.”

The problem is confounded when the supposedly liberal West refuses to stand by the Iranians exercising free speech and prefers to appease the oppressors.

Former Presidential Candidate, Mitt Romney, criticised President Obama for refusing to act against the mullah during the Green Movement Protests of 2009.

He said: “When millions of Iranians took to the streets in June 2009, when they demanded freedom from a cruel regime that threatens the world, when they cried out, ‘Are you with us, or are you with them?’ – The American President was silent.”

Khorsandi sarcastically recommends that at the UN General Assembly Trump should approach Federica Mogherini, the EU’s high representative on foreign affairs, because of her “special relationship” with the Iranian Regime and especially Javad Zarif, Iran’s foreign minister.

Khorsandi wrote: “She is also something of a superstar in the Iranian parliament. When she visited this hub of democracy last month, off came any pretence of being respectable politicians, and out came the mobile phones as the supposedly distinguished parliamentarians, scourge of Washington and Tel Aviv, mobbed her for selfies.”

He suggests that Trump capitalises on this relationship to get Mogherini to pressure Zarif over human rights, but it is doubtful that Mogherini would actually do this. After all, she did attend Hassan Rouhani’s inauguration without bringing up his human right record, which she cannot be unaware of.

Khorsandi advises that Trump step up to the plate and begin to really target the Iranian Regime, before it is too late.