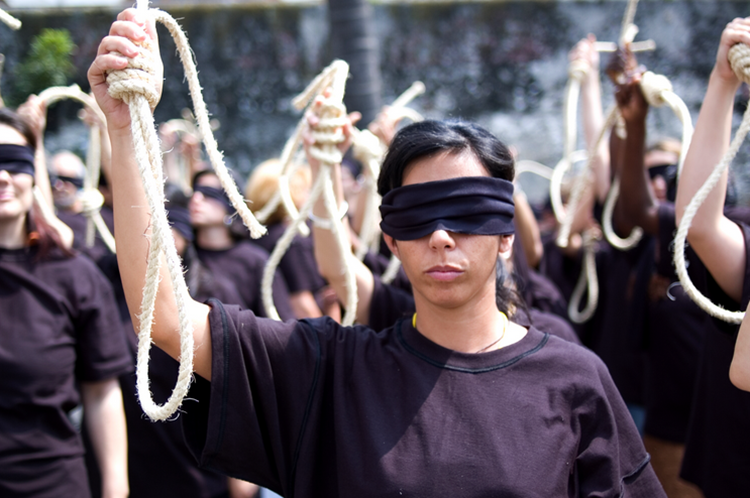 London, 4 Oct – Every month, Iran Human Rights Monitor releases a report in the situation of human rights in Iran and it always makes for uncomfortable reading. The September version was no different, with an unprecedented crackdown on human rights advocates, several official reports of cruel and inhumane punishments, and at least 33 executions.

We’ve produced a summary of the report here, but, as always, we encourage you to download the full PDF and learn more. When reading either piece, please remember that because of the closed and insular nature of the Iranian government, the figures given may be much smaller than in reality.

Arbitrary murders: There were seven arbitrary murders recorded, which means that the victim was killed without any sort of legal process. Most of those killed were fathers who were working as porters – carrying goods between countries through mountainous areas – but one was a 17-year-old boy.

Deaths in custody: At least nine prisoners died through torture, being denied access to medical care, or through suicide whilst in prison, showing how harsh the Iranian prisons are, which is something we’ll go back to later.

Floggings: Two flogging sentences were carried out; one of a protester arrested during the December 2017 uprising (70 lashes) and one in public. Another sentence of 74 lashes each was issued to six activists that took part in a political rally on May 10.

In September, there were 197 arrests in Iran, 153 political, 22 based on religion/ethnicity, and 22 for arbitrary reasons. Iran’s security forces have been arresting en-masse Ahvazi Arab activists (even opening fire on young activists attempting to flee), striking truck drivers (who are simply demanding fair pay), other striking workers (who were protesting executions) without any real explanation given for the arrests.

As promised earlier, we are returning to the condition of prisons in Iran. The prisoners here are subjected to abuse, mental and physical torture, the denial of medical treatment, the denial of leave, restricted access to legal counsel, and the harassment of their families. As a result, at least 22 prisoners are on hunger strike in prisons across Iran.

One prominent example of the mistreatment of prisoners in human rights defender Arash Sadeghi. He has cancer, which requires special medical care, but the Iranian government is denying this to him. After he was allowed to have the major surgery he required, he wasn’t even allowed to recuperate for one hour before he was removed and shackled whilst still unconscious, which meant medical staff could not conduct their post-op checkups.

The Iranian government has continued their crackdown on religious minorities, by blocking 57 members of the Baha’I faith from pursuing higher education, despite the fact that they had passed the national university entrance examination, some with outstanding results. They were told that they had “deficient records”, an option that prevents Baha’i students from accessing their computer records and bars them from higher education.

In addition, 20 Baha’is were arrested in September.

The Hill: President Obama’s assertion in the State of the...

CNN: Iran's response to the international community's offer of...