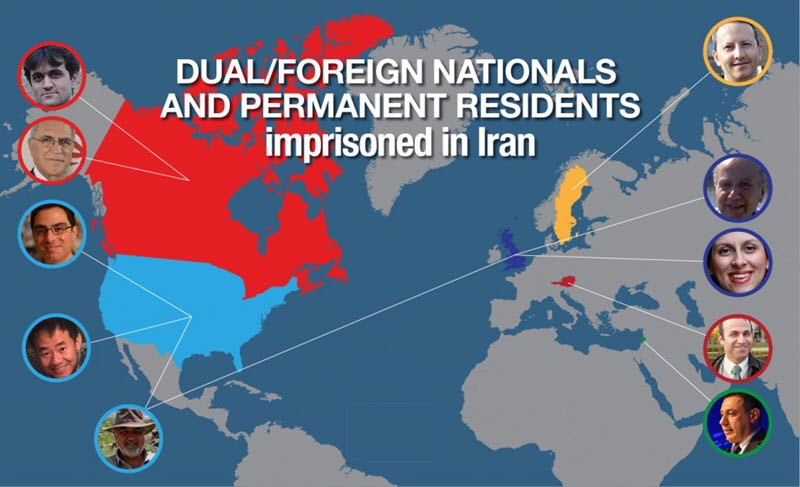 Jason Rezaian, the Iranian-American reporter who was detained for 18 months in the Islamic Republic before being released as part of a prisoner swap in January 2016, is slated to testify in US federal court on Tuesday as part of a lawsuit that he filed against the Iranian government shortly after returning home. Domestic lawsuits against sovereign foreign nations are ordinarily not permitted under American law, but exceptions are made for cases involving allegations of terrorism, torture, or hostage-taking by nations that are designated by the US State Department as state sponsors of terrorism.

According to the Washington Post, Rezaian’s employer both before his arrest and after his release, the pending lawsuit describes Iran as easily matching all the criteria for exemption from the Foreign Sovereign Immunities Act. As such, the plaintiffs in the case are seeking damages for emotional suffering associated with torture and the stress of the ordeal for both the prisoner and his advocates. Rezaian’s wife, Yageneh Salehi, was also arrested in an apparent effort to exert greater pressure on the reporter to issue a false confession of spying.

Although Salehi’s detention lasted only two months, both individuals reportedly experienced ongoing physical abuse and threats of execution, mutilation, or dismemberment. Rezaian and Salehi have both indicated that they considered suicide, as did Rezaian’s brother Ali. The effects of protracted mistreatment have evidently left such an impact on Jason Rezaian that he will require specialized medical treatment for the rest of his life.

Extensive reporting to this effect indicates that the lawsuit is very likely to be successful, especially considering that no representative of the Islamic Republic has appeared to defend against the charges. The plaintiffs’ attorneys are therefore seeking a default judgment, and there is a long history of such judgments being granted in cases involving the Iranian regime’s human rights violations. Collecting the damages is a matter of greater difficulty, however. According to the Washington Post report, US courts have ordered the Iranian government to pay 46 billion dollars since 1996, but only 2.6 billion has been acquired from frozen Iranian assets, while another 2.2 billion was dispersed from a fund comprised of money paid to the US by banks that have been caught violating sanctions on the Islamic Republic.

But regardless of whether the Rezaian family is able to gain access to either of those sources of restitution, the case and the former prisoner’s testimony serve the further purpose of bringing renewed attention to what is by all accounts an ongoing issue related to Tehran’s human rights record. That same role will surely be filled by Rezaian’s publication of a book on January 22 detailing his ordeal. The information in that memoir and in his testimony may provide a window into the experiences of other dual nationals who remain imprisoned in the Islamic Republic to this day.

Fittingly, the Washington Post’s reporting on the Rezaian case closely coincided with reports in other media about some of these other victims of the regime’s campaigns of hostage-taking and arbitrary detention. In one example, Fox News published excerpts of an interview the outlet conducted the previous week with David Levinson, the son of former FBI agent Robert Levinson, who has been missing since 2007, when he disappeared from Kish Island during an investigation of cigarette smuggling.

Iranian authorities have repeatedly denied knowing his whereabouts, and there is much speculation that Levinson, who was 58 at the time of his disappearance, has died. But his family insists both that he is alive and that the Iranian government is holding him in one of its prison facilities or otherwise knows his location. Claims about his death had already begun to emerge prior to 2011, when the family received proof of life in the form of an image of Levinson in an orange prison jumpsuit. If his relatives are correct about his fate, it would make him the longest-held American hostage in history.

At the same time, there are a number of other Western nationals who will come close to matching Levinson’s current record if they serve out the entirety of their prison sentences. Multiple American citizens and permanent residents have recently been assigned 10-year terms as a result of espionage and national security charges that are almost certainly false in every case. Among these is the Princeton doctoral candidate Xiyue Wang, who was arrested in 2016 while visiting Iran to conduct library research on the Qajar dynasty. Although the relevant documents covered a period of time that ended more than 50 years before the establishment of the Islamic Republic, Wang was accused of gathering sensitive information and conveying it to the United States.

The Huffington Post published an update about Wang’s case on Sunday, emphasizing the psychological toll of his 10-year sentence and the impact that it has had on his wife and five-year-old child in the US. The article details the role that the wife, Hua Qu has played in advocating for Wang’s release. It notes that as with the Levinson family and other close relations of persons imprisoned in Iran, Qu has expressed frustration with the American government and specifically with representatives of the State Department, with whom she reportedly speaks every week or two.

According to the Huffington Post, “officials respond to her requests for updates but don’t usually have any new information to offer.” Instead, most of the information that she acquires about her husband’s case comes from Wang himself, as she has managed to speak with him by phone on a near-daily basis. Such reliable telephone access makes Wang particularly fortunate among Iranian political prisoners, even though he has used that access to describe severe depression and untreated medical issues.

Wang’s openness about such topics could ultimately make him subject to harsher treatment by prison authorities, as evidenced by some of the latest information regarding the Iranian-British political prisoner Nazanin Zaghari-Ratcliffe. The 40-year-old woman recently announced that she and the human rights attorney and fellow political prisoner Narges Mohammadi would be undertaking a hunger strike for at least three days, beginning on January 14. The protest relates to the well-known tactic of extrajudicial punishment and pressure that is the denial of medical treatment to inmates.

Since her initial arrest in April 2016, Zaghari-Ratcliffe has been experience a steady decline in her physical well-being, and she now suffers from persistent numbness in her extremities, along with neurological problems, and has discovered lumps in her breast that may be indicative of cancer. Last year, the withholding medical care was made subject to particularly widespread criticism after images spread online of a former political prisoner who had lost an eye and part of his jaw to cancer surgery because the disease had gone untreated while he was serving his prison term. Multiple other prisoners have reportedly died under similar circumstances.

Hunger strikes are a familiar form of protest in Iranian prisons and are often effective at drawing attention to inmates’ grievances. In view of this fact, as well as the sensitivity of the given issue, regime authorities have showcased serious anxiety over the forthcoming action. According to the Evening Standard, phone calls between Zaghari-Ratcliffe and her British husband were abruptly canceled after the joint announcement from her and Mrs. Mohammadi. Overall phone privileges were restricted as well, and The Guardian reported that Zaghari-Ratcliffe also had her food ration cut.

The latter report notes that the denial of medical treatment to both women has been sustained in spite of promises from the prison doctor. The situation has apparently generated a new outpouring of vocal support from British officials, although it remains to be seen whether the UK government will actually intercede with Tehran in a more serious or effective way.

Tulip Siddiq, the Member of Parliament representing Zaghari-Ratcliffe’s home in Britain, criticized the preexisting response by saying that “tough rhetoric is not enough.” Meanwhile, the shadow foreign secretary, Emily Thornberry, elaborating upon the rhetoric by suggesting that Tehran’s “barbaric” treatment of the prisoner constituted the regime “burying their own diplomatic grave.”

Yet the Iranian judiciary and hardline media have remained defiant about this and similar cases. The Guardian quoted judiciary spokesman Gholam-Hossein Mohseni-Ejei as saying that “releasing or keeping Zaghari is no way affected by [foreign diplomats’] interference.” This commentary can presumably be generalized to include not only Zaghari-Ratcliffe’s fellow detained dual nationals but also the broader population of scholars, activists, artists, and public personalities who have come under threat from the regime’s escalating crackdown.

On Monday, the Los Angeles Times added a new group to the list of those who are apparently being targeted in this action. It observed that two demographers, one of whom is a citizen of both Iran and Australia, have been arrested because their research contradicted the push by Supreme Leader Ali Khamenei to promote a higher birthrate and larger families throughout the Islamic Republic.

The article quoted Iranian political analyst Siavash Ramesh as saying of these latest arrests, “It’s a signal to people in the country to be careful, or you will end up in jail. If a demographer who says the population is good enough, is jailed, then who is safe?”

Demography is not the first academic discipline to be identified as a supposed threat to the clerical regime. Last February, eight environmental researchers were arrested and accused of spying on behalf of Western powers. One of these, an Iranian-Canadian professor by the name of Kavous Seyyed-Emami, was found dead in his prison cell soon thereafter. Although authorities attributed the death to suicide, this account has been vigorously disputed and the case continues to stand out as a warning of the dangers faced in Iranian prisons by dual nationals and political detainees more generally.

CNN: Iran is prepared to resume talks over its...