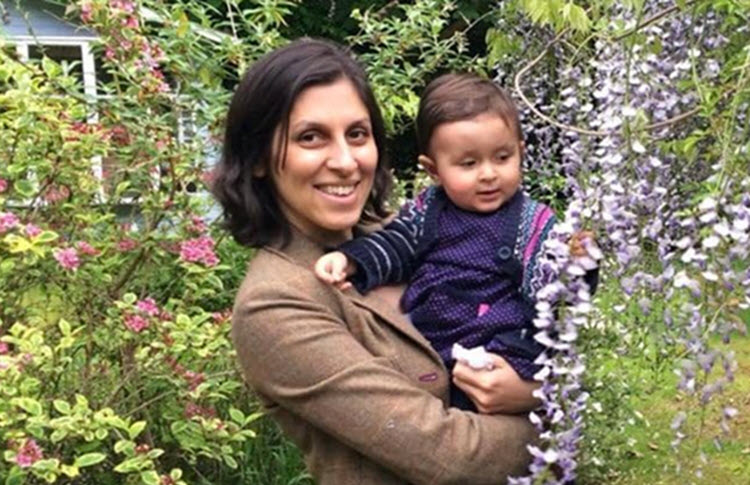 Nazanin Zaghari-Ratcliffe is a British-Iranian dual citizen that was arrested and sent to prison in Iran in April 2016 where she has been detained since. The Iranian authorities have charged her with spying and attempting to topple the country’s government. Officials have said that she was in charge of a “foreign-linked hostile network”. Tehran’s prosecutor general said almost two years ago that Nazanin is being detained because she was running a journalism course with the purpose of spreading propaganda about the regime.

Nazanin and her family strenuously deny that she was doing anything other than visiting her family and introducing her baby daughter to them.

The forty year old has been badly mistreated in prison and her family are gravely concerned about her condition. Until Monday, she had been in the notorious Evin Prison in the country’s capital – a prison that has faced much controversy because of the number of political prisoners that are held there and the very poor conditions and torture that they are subjected to.

Her husband, Richard Ratcliffe, said that she was taken from Evin Prison on Monday and transferred to the psychiatric ward of a hospital in Tehran. She is being guarded by Revolutionary Guards. Mr. Ratcliffe hopes that this is an indication that she will soon be released.

Clearly not wanting to open himself up to disappointment, he said that the move was a “possible prelude to her release”, but stated that it was also very possible that she would be sent back to prison once her treatment has finished.

Mr. Ratcliffe also indicated it was possible that something far more sinister is going on. He said that the last time she was in contact with a Revolutionary Guard while she was on hunger strike, they tried to get her to sign documents denouncing the British government and also to confess to certain things.

Nazanin’s father went to the hospital in Tehran with the hope of being able to see his daughter, but he was refused access. Nazanin has also not been allowed to contact her family in any way.

Mr. Ratcliffe said that when he heard his wife was being transferred to a hospital, he said that he felt positive. However, when it transpired that she was being guarded by the IRGC, he admitted that he became worried about the situation.

Before her transfer, Nazanin told her relatives that she was fit and healthy before being arrested and put in jail. Now she said that she is finding it harder and harder to survive in jail and said that she hates “being played in the middle of a political game”.

The Iranian authorities have arrested a number of dual-nationals over the past few years, with many saying that Tehran clearly is looking for political leverage over other countries. Indeed, the Iranian Foreign Minister offered the United States a prisoner swap in the hope of bringing several jailed Iranians back to Iran.

Nazanin’s five-year-old daughter has been living with her maternal grandparents since her arrest.

Reuters: After a year of sanctions and sabre-rattling over...