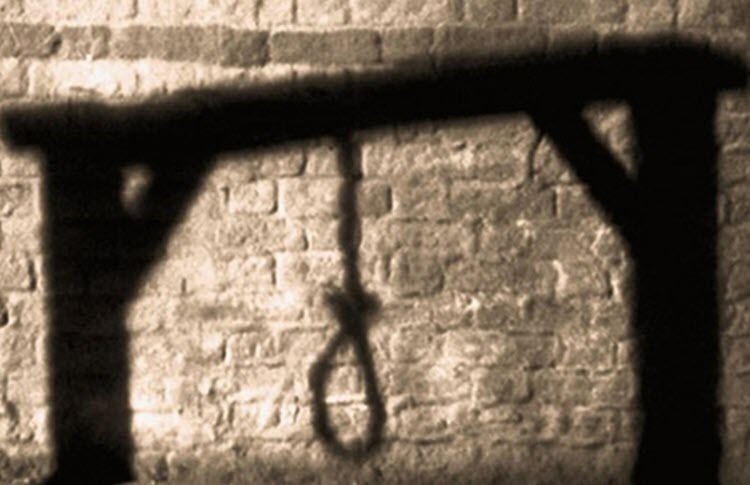 Iranian authorities have hanged ten prisoners in the past few days in the cities of Mahshahr, Nowshahr, Urmia, and Khandab, with two being hanged in public.

On Wednesday, Iran hanged one inmate in Bandar Mahshahr, southwest Iran, but his name is unknown. They also hanged two inmates convicted of drug charges – Moharam Nemati and Asgar Bartar – in Urmia prison in northwest Iran, who it’s believed were transferred to solitary confinement on Tuesday in preparation for their executions.

They also executed a woman, identified only by the initials “Z.S.M.”, in Noshahr Prison, in northern Iran. Some sources say she was Zahra Safari Moghaddam. The 43-year-old is the 90th woman known to have been executed in Iran since 2013, when the supposed moderate Hassan Rouhani became President.

On Tuesday, a unnamed man was publicly hanged in Khandab, central Markazi Province central Iran, in public view in Jihad Street. He was accused of murder.

Four inmates – Hayman Banawand, Jafar (Iman) Mohammadi, Mohammad-Aref (Jahangir) Najafian and Mahmood Khaledi – were executed in Urmia prison. They were accused of murder and had transferred to solitary confinement on Monday.

A prisoner identified as Veis Alipour was hanged in Mahabad prison, western Iran, with his execution taking place in the yard in full view of his fellow inmates.

Iran is number one in the world for executions per capita, even in the case of juvenile offenders, and over 3,700 people have been executed since Rouhani took office. Iran has been condemned by UN human rights bodies on 65 occasions for gross human rights violations, including the violation of basic human rights especially of minorities, executions, brutal punishments such as amputation and flogging, and degrading treatment of prisoners.

In 2018, according to the Iran Human Rights Monitor’s annual report, at least 285 people were executed in Iran, including at least 10 political prisoners, four women, and seven juvenile offenders.

The Women’s Committee of the National Council of Resistance of Iran (NCRI) wrote: “The Iranian regime deploys execution and the death penalty as a tool for maintaining its grab on power and for silencing a disgruntled populace the majority of whom live under the poverty line, while unemployment is rampant in the country and there is no freedom of speech.”

The Iranian organised opposition and its leader Maryam Rajavi have called for the abolishment of the death penalty in their 10-point plan for a Free Iran, which is committed to human rights

Reuters: Iran has not approached Malaysia for barter deals...