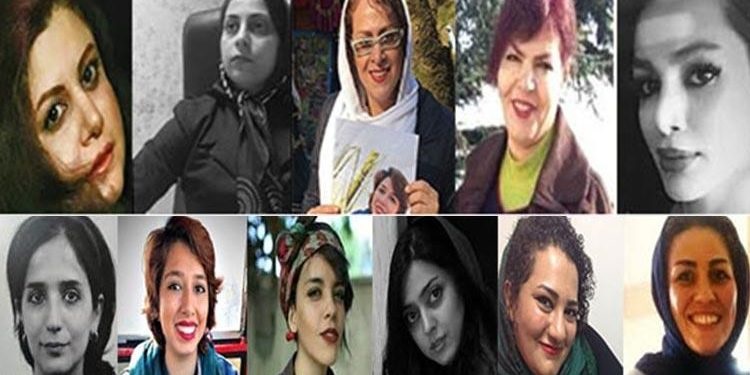 Female political prisoners held in Iran’s notorious Evin Prison wrote in a statement: “It is up to us to leave their elections for themselves and remain in the real square of popular elections.

Anyone who goes to the polls, his/her fingerprint will remain on the trigger of the gun, which is pointed at the revolutionary youth, which is a confirmation of the ruling system and its crimes. The boycott and rejection of the election is an Iranian pact with the martyrs, especially the martyrs of the recent uprising.”

“For 41 years, they are trying to show their totalitarian reign democratic by repeating the word “elections”. But since the early days, the freedom of the people and their votes have been looted in Iran.

“On the same day that the Assembly of Experts was formed for the protection of the totalitarian religious dictatorship (Velayat-e-Faghih) instead of the Constituent Assembly with the free elections of the Iranian people, people’s right of sovereignty and the election was usurped and stolen from the Iranian people.

“The Islamic Consultative Assembly was formed, for the elimination of all political groups except the narrow circle of the totalitarian tyrants, and each year the circle became tighter and even they shooting themselves in the leg (as we now see), not a democratic but an anti-democratic element and anti-people is totally at the service of the sovereignty, and it has no use other than that. As most of its approvals have attested over the years.

“Today, the tyranny of the Islamic Republic has reached a point where fears of a public boycott of elections, government elements come one after the other, inviting people to the polls as if the head of the judiciary threatened, “anyone with any title, who questions the election in any way is the enemy of the system (regime).” But the Iranian people have declared their true and irreversible votes from the (protests of) January 2018 – to the bloody uprising of November – and announced it clearly with courageous on the streets.

“Politics, now, are not as the reformers want it to be, which means in the process of politicized elections, the situation with Iranian society is becoming revolutionary, not least in the protests and strikes. The government is so reactionary (as its entire life) that when it was confronted by the politics and the vote of the people on the streets, in a short time during the protests it killed brutally 1500 of Iran’s people and added another infamous record to its criminal records.

“This regime and its election is based on the blood of millions of innocent youths: April 1979, July 1979, June 1981 and the and the massacre of the 1980s, especially the mass killing in the summer of 1988, chain murders of the 1990s, the slaughter of Khatun Abad and Eslamshahr and the killings of the protesters in 2009, the disasters of Kahrizak (Kahrizak Detention Center), the mass execution of the Kurdish compatriots under the title of terrorism in Iran’s prisons, the killings of the protesters in 2018 and most recently, the brutally killing of the people in November 2019.

But the Iranian people do not allow even a single drop of these unjustly shed blood to be unanswered. This blood will flourish in the protests and surges, rose from the pain and suffering from the people against tyranny and plundering.

“The future has never been and will not be submissive and obedient. All the defenders of Islamic rule, writers and officials, those who submit and accept unjustly the continuation of this rule, are vicious – whether those who have been sitting in the leadership experts or those in the seemingly national parliament.”

Washington Times: Tehran will seek a seat on the...