10 Iranians Sentenced to Prison and Flogging for Protests 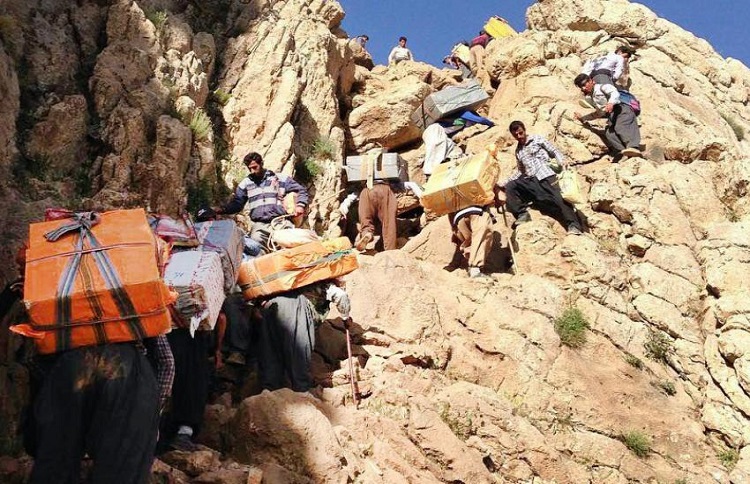 According to ISNA, due to unemployment, coercion, and low wages, the Kulbars cross the border, import, and export goods. Hamshahri wrote that Kulbar turned to this job due to the lack of a suitable job with a fair income. The average monthly income of each Kulbar is reported to be 3 million Tomans.

These hard-working people are facing daily attacks by the Iranian regime and many of them has been killed until now. Now, the regime has sentenced 10 men to prison terms and lashes for protesting the murder of porters by regime agents.

The court in Baneh, Kurdistan, sentenced the following men to three months in prison, 25 lashes, and a 25 million tomans (around $1,136) fine for protesting outside the Baneh Governor’s Office in September 2017:

The ten had protested the murder of two Kurdish porters – Heydar Faraji, 21, and Ghader Bahrami, 45 – by agents of the regime on September 4, 2017, for the sole crime of working as porters.

The murders led to widespread protests in Baneh and across Kurdistan province, following a call by local activists, with people shutting their stores and taking to the streets.

Plainclothes agents attacked the protesters, using live ammunition and tear gas to disperse the crowds. It’s the sort of reaction to peaceful protests only seen by despot governments.

Porters, also known as kolbars (Porters), are frequently harassed by the Iranian regime’s guards on the border with Iraq. Some have their goods of money stolen, many are injured, and some are killed.

In 2018 alone, at least 48 kolbars were killed by security forces and 104 porters were wounded. This doesn’t even take into account the other dangers caused by traversing the mountainous terrain between Iran and Iraq on foot, whilst carrying heavy goods on their backs.

This line of work has increased dramatically in the past few years as poverty has increased, particularly among Kurdish people who find it harder to get employment because of the regime’s laws.

In a related story, Kurdish activist Ahmadreza Haeri was flogged 74 times on Sunday and has begun serving six months in the Greater Tehran Penitentiary for “spreading propaganda against the state” and “disrupting public order”, which is code for protesting a brutal assault on political prisoners in Evin Prison in April 2014.

The assault took place during a raid of Ward 350, where political prisoners are held, by over one hundred guards and intelligence agents; some in plain clothes. The inmates were beaten, with over 30 suffering serious injuries and 32 taken to solitary confinement

Following that, many relatives were harassed by the regime for speaking out and some, like Haeri, were arrested for raising awareness.

Why Have Iran’s Nuclear Talks Stalled?

The Iranian nuclear talks in Vienna have been stalled...