Javaid Rehman, the UN investigator on human rights in Iran, called for an independent inquiry into the role of Ebrahim Raisi in the execution of thousands of political prisoners in 1988.

“The U.N. investigator on human rights in Iran has called for an independent inquiry into allegations of state-ordered executions of thousands of political prisoners in 1988 and the role played by President-elect Ebrahim Raisi as Tehran deputy prosecutor.

“Javaid Rehman, in an interview with Reuters on Monday, said that over the years his office has gathered testimonies and evidence. It was ready to share them if the United Nations Human Rights Council or other body sets up an impartial investigation.

Then in the interview, he added: “I think it is time and it’s very important now that Mr. Raisi is the president (-elect) that we start investigating what happened in 1988 and the role of individuals,” Rehman said from London, where he teaches Islamic law and international law.”

He added: “Otherwise we will have very serious concerns about this president and the role, the reported role, he has played historically in those executions.”

Rehman said: “We have made communications to the Islamic Republic of Iran because we have concerns that there is again a policy to actually destroy the graves or there may be some activity to destroy evidence of mass graves.”

“I will campaign for justice to be done,” he added.

Javaid Rehman, in an interview with Reuters on Monday, said that over the years his office has gathered testimonies and evidence. It was ready to share them if the United Nations Human Rights Council or other body sets up an impartial investigation.
He said he was concerned at reports that some “mass graves” are being destroyed as part of a continuing cover-up.

It should be noted that on June 19, 2021, Amnesty International’s Secretary General Agnès Callamard, said in response to the news of the announcement of Ebrahim Raisi as the next President of Iran: 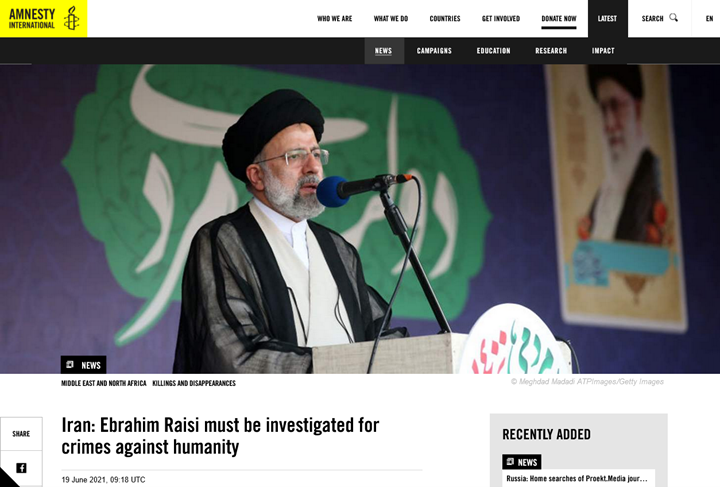 “That Ebrahim Raisi has risen to the presidency instead of being investigated for the crimes against humanity of murder, enforced disappearance, and torture, is a grim reminder that impunity reigns supreme in Iran. In 2018, our organization documented how Ebrahim Raisi had been a member of the ‘death commission’ which forcibly disappeared and extrajudicially executed in secret thousands of political dissidents in Evin and Gohardasht prisons near Tehran in 1988. The circumstances surrounding the fate of the victims and the whereabouts of their bodies are, to this day, systematically concealed by the Iranian authorities, amounting to ongoing crimes against humanity.”

“We continue to call for Ebrahim Raisi to be investigated for his involvement in past and ongoing crimes under international law, including by states that exercise universal jurisdiction.

“It is now more urgent than ever for member states of the UN Human Rights Council to take concrete steps to address the crisis of systematic impunity in Iran including by establishing an impartial mechanism to collect and analyse evidence of the most serious crimes under international law committed in Iran to facilitate fair and independent criminal proceedings.”