Three decades of ‘strategic resistance’ between Iran and Syria 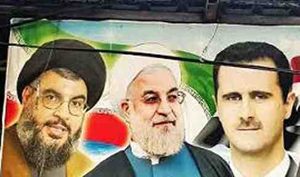 According to Press TV, Iranian state-owned media, Ali Akbar Velayati stated during his meeting with the Syrian Ambassador in Iran Adnan Mahmoud, “those who oppose holding the presidential election in Syria are the parties that support terrorism in the country.”

In addition, from the perspective of Hezbollah Secretary-General Sayyed Hassan Nasrallah, Assad does not face a serious threat of being overthrown. Nasrallah called for the reelection of Assad. For the head of Assad’s main Lebanese Shiite ally, this presidential election is primarily aimed at enhancing the outward and perceived legitimacy of the Syrian government.

The Syrian presidential election will be held in the midst of a raging civil war. For first time since 2000, when Bashar al-Assad took power from his father Hafez al-Assad, an opponent will run against him. It is a forgone conclusion that Assad will score a victory in this election.

As the conflict in Syria continues, Hezbollah’s military, economic, and geopolitical relationship with Iran’s Quds forces (a special forces of Iran’s Revolutionary Guards that deals with extraterritorial affairs) and Iran’s supreme leader is tightening. Consequently, Hezbollah’s dependence on these Iranian establishments is heightening.

It is crucial to note that while Hezbollah enjoyed some amount of political independence, and carried out some policies in Lebanon or in the region in its own interests without the need for Ayatollah Khamenei’s blessings, it’s military and political policies have become to a great extent subject to Iran’s interest. For Iranian leaders, the Syrian war is a threat to Tehran’s national security.

One of the misconceptions among scholars, politicians, and policy analysts, is that the alliance between Hezbollah and Iran is a solely strategic partnership. Even the United States and its intelligence apparatuses have frequently characterized the relationship between Iran and Hezbollah as strategic.

This view fails to take into account the nexus and other crucial facets specifically between Hezbollah and Khamenei. Equally important to strategic partnership is Hezbollah’s view of Iran’s supreme leader and its common ideological underpinnings with the Islamic Republic.

Therefore, Lebanon’s and Hezbollah’s interests, and the identity of Hezbollah as a powerful Lebanese social and political grassroots movement, becomes secondary to Iran’s interests when Iran’s supreme leader realizes that his political, economic, and strategic interests are under threat.

The increasing involvement of Hezbollah in the Syrian conflict, and its role in escalating the sectarian language of the war, cannot be interpreted in any sense as beneficial to the interest of Lebanon.

Involvement in the Syrian war ought to not only be analyzed as a strategic partnership between Iran and Hezbollah, but also as an ideological, sacred and divine one.

The resistance and resilience bloc: Hezbollah, Iran and Syria

From the view of Iranian and Hezbollah authorities, the underlying issue is not solely restricted to keeping a specific individual in power. Although they have been the staunchest allies of Assad considering military, political, advisory, intelligence and economic landscapes (and despite the fact that they have robustly defended his run for the Syrian presidential election), the fundamental reasons are not so evident.

One of the most powerful and extensive alliances in the Middle East, which is also known as the resistance and resilience bloc between Hezbollah, Iran, and Syria is a result of almost three decades of strategic, geopolitical, and economic investment orchestrated and guided primarily by the Islamic Republic (and to be more specific by Iran’s supreme leader, Iran’s Revolutionary Guards, Quds forces, and its intelligence ministry, Etela’at).

Any kind of military, political, advisory, and economic involvement in Syria, as well as any Hezbollah or Iranian backing of Assad is aimed at retaining this extensive and lengthy strategic investment. Maintaining this robust resistance and resilience bloc exceeds the interests of a single player.

This illustrates the notion as to why Iranian leaders have declared that the war and conflict in Syria is a threat to their own national security. A significant amount of political debate in the Islamic Republic and its media coverage is also centered on the Syrian conflict.

When Iran views a regional phenomenon as a threat to its national security, Hezbollah will be obliged to take any possible action in order to serve Iran’s, its supreme leader’s and its Revolutionary Guard’s interests, though this might run against Lebanon’s interests. Khamenei and the Revolutionary Guards, which operate directly under his command and perceive themselves as the leading Shiite and revolutionary power, currently posses the paramount and leading word when it comes to retaining this resistance and resilience bloc.

The Scotsman: The French company chairman under investigation for...