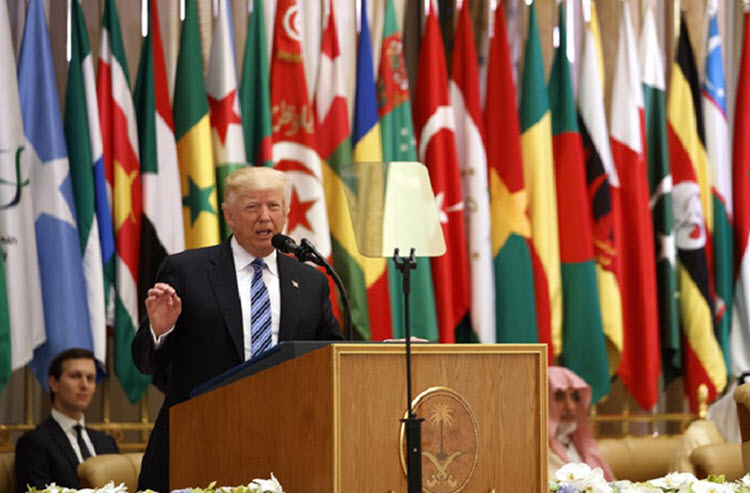 London, 11 Sep – Yesterday, President of the United States Donald Trump called on Saudi Arabia and other Arab States to unite with Qatar once again, resolve their issues, and show that they are united against Iran.

He spoke separately with Crown Prince Muhammad bin Salman of Saudi Arabia, Crown Prince Sheikh Muhammad bin Zayed al-Nahyan of the United Arab Emirates (UAE), and Qatar’s Emir Sheikh Tamim bin Hamad al-Thani. He said that as US Arab partners, he wanted them to move together to promote stability in the region and to counter the threat that Iran is currently posing.

A spokesman from the White House said that the leaders spoke about the Iranian threat and President Trump wants the commitments made at the Riyadh Summit to be realised. Some of the commitments discussed at the summit include combatting extremist ideology, cutting off funding for terrorist groups and eventually defeating terrorism once and for all.

Shortly before speaking with each of the leaders, Trump had said that he was willing to intervene in the dispute between the Gulf Arab states and Qatar. He also said that it was likely a resolution could be made quickly.

Earlier this year, the UAE, Egypt, Saudi Arabia and Bahrain cut diplomatic relations with Qatar, as well as all trade, shipping and air ties. Qatar is where a huge US military base is located.

The reason for the severing of ties was because of the close relationship between Iran and Qatar. Doha, however, denies there is any truth behind the accusations.

Yesterday, for the first time since the beginning of the dispute, Saudi and Qatari leaders spoke on the telephone. Thani of Qatar said that there was a possibility, and a willingness on the Qatari side, to discuss a settlement of their dispute, according to media reports.

Qatari state media reported that the telephone call was very positive and represented a breakthrough thanks to President Trump. However, Saudi Arabia denied such claims and has subsequently suspended dialogue with Qatar because of the “distorted facts” portrayed by its state media.

In the meantime, officials from Kuwait were in Washington. US Secretary of State Rex Tillerson and President Trump said they backed efforts to mediate the Gulf Arab dispute by Kuwaiti Emir Sheikh Sabah Al Ahmad Al Sabah.

Tillerson said yesterday: “We support his efforts to help bring about a settlement. The United States and Kuwait both recognize the important of [Gulf Cooperation Council] unity to meet the challenges of the region that we all face together, not the least of which is the threats from Iran.”

Reuters: The civil war in Syria is widening a...

The Guardian: The intelligence came from an exotic variety...