Is the Iranian Regime Taking Advantage of the Kurdish Referendum? 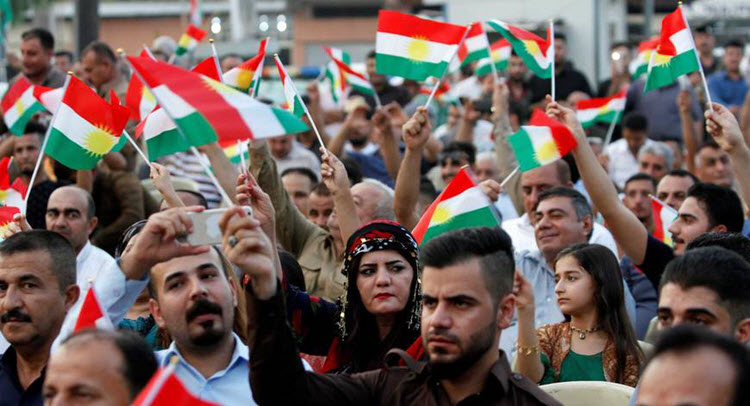 London, 1 Nov – The Iranian Regime is set to emerge as the big winner in the Kurdish Independence Referendum by taking advantage of the Iraq’s destabilisation.

Ever since Kurdish president Masoud Barzani, leader of the Kurdistan Democratic Party (KDP), held the referendum on independence in September, the balance of power has changed dramatically, exposing the Kurds limited hand and Iran’s dominant role in the fate of the Kurds.

Despite the Kurdish people’s overwhelming vote for independence, Iraqi troops backed by the Iranian Regime swarmed the Kirkuk region, which the Kurds rescued from ISIS, on October 16, and forced the Kurds to flee.

Hassan Shaaban, a political commentator and rights activist in Baghdad, said: “The Iranians outwitted the Americans; they were the driving force behind the deal to hand over Kirkuk.”

Irn’s Major-General Qassem Soleimani, a key ally of the KDP’s main opposition, the Patriotic Union of Kurdistan (PUK), was in fact seen in the area leading a force and warned the KDP to withdraw or be killed before the siege, which has only deepened the split in the Kurdish forces.

Now many political commentators are worried that Iran will exploit the fragile political situation for its own illicit means, by moving the Kurdish capital to a region that its PUK allies prefer.

Renad Mansour, an Iraq expert at the Chatham House think-tank said: “Iran was always one step ahead on the referendum, [and knew that despite warnings from the West, Barzani would not postpone the referendum]. The US was left scrambling while the Iranians were plotting.”

This referendum pulled Soleimani, a high-ranking member of the Iranian Revolutionary Guards Corps (IRGC) which was recently sanctioned by the US for terrorism, further into Kurdish politics, and showcased how Iran’s control in Iraq extends far beyond the central government.

Iranian control of Iraq is a worry for many Iraqi politicians, even those who supported the raid against the Kurds.

Ahmed Asi al-Obeidi, a Sunni tribal sheikh and a member of Kirkuk’s tribal council, said: “We feel worried seeing the octopus arms stretching deeper in the north. We all have seen the problems Iranian meddling has caused in other parts of Iraq, including mainly Sunni areas, and if the same amount of interference is repeated in Kurdish areas, then the worst is coming and instability will prevail.”

Now Barzani will step down as the Kurdish President and his powers will be divided between Parliament until a successor is named, but one thing is clear: Iranian interference will negatively affect the uneasy coalition between the PUK and KDP and their ability to negotiate with Iraq.

It seems likely that Iran will persuade Iraq to favour the PUK and, as such, may soon have a proxy force in control of yet more land in the MiddleEast.

Sunday Telegraph: Iran is using the Gulf port of...