AP: A group of U.N. independent experts urged Iraq on Monday to reveal what happened to seven members of an Iranian dissident group who were allegedly abducted in September. 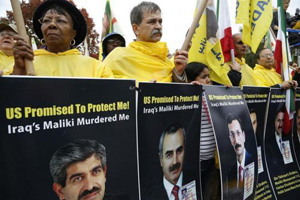 GENEVA (AP) — A group of U.N. independent experts urged Iraq on Monday to reveal what happened to seven members of an Iranian dissident group who were allegedly abducted in September.

Six women and one man went missing after a Sept. 1 attack at that killed 52 people at the Camp Ashraf refugee camp in Iraq that once housed 3,000 Iranian exiles. The Geneva-based panel of human rights experts noted allegations that the attack and the abduction were conducted by Iraqi security forces.

The dissidents accuse Iraqi security forces of carrying out the killings, arguing that Iraq wants to reclaim camp property worth hundreds of millions of dollars. Baghdad denies involvement and says an internal dispute is to blame.

The 52 fatalities were among 101 core followers of the Mujahedeen-e-Khalq dissident group who had stayed behind to protect and sell off its remaining property.

“We call upon the government of Iraq to speed up the investigations in order to disclose the fate and whereabouts of the individuals,” the U.N.’s Working Group on Enforced or Involuntary Disappearances said in a statement.

The group said it has been alleged “that it is impossible for anyone to enter Camp Ashraf without the cooperation of Iraqi forces.”

The U.N. experts also noted the brutal circumstances. The victims all reportedly died from gunshot wounds, mainly in the head or neck, some with their hands tied, and some while fleeing or seeking medical help after being wounded.

“International law clearly requires governments to ensure that all allegations of killings are investigated in a prompt, effective and impartial manner, irrespective of who the perpetrator is,” the U.N.’s special rapporteur on extrajudicial, summary or arbitrary executions, Christof Heyns, said.

U.N. officials who visited the camp shortly after the shooting condemned the bloodshed but did not make any determination about who was responsible.

Members of the Mujahedeen-e-Khalq, which opposes Iran’s regime, were welcomed into Iraq by Saddam Hussein in the 1980s, but Iraq’s current Shiite-led government wants them out.

In October, ex-foreign ministers Bernard Kouchner of France and Sid Ahmed Ghozali of Algeria, along with Tahar Boumedra, a former U.N. official in Iraq, met with the dissidents’ group in Geneva to urge a thorough international probe.

Boumedra, who once oversaw the camp, said the Iraqi government, which is highly suspicious of those linked to the former Iranian regime, knew beforehand there were attacks planned on the camp. He also said the U.N. never determines who is responsible for attacks at Ashraf, but merely performs a body count to avoid incurring the wrath of the Iraq government and risking the continued presence of the U.N. mission there.

The Mujahedeen-e-Khalq’s continued presence in Iraq has been an irritant to Iraq’s postwar leadership, which has sought closer ties with neighboring Shiite powerhouse Iran. The group says it renounced violence in 2001, and that Camp Ashraf residents were guaranteed their safety by U.S. troops who disarmed them after the 2003 invasion.

Shahin Gobadi, a spokesman for the group, said Monday that the U.N.’s secretary general, the Security Council and the mission in Iraq all should now call on Iraq to “observe its responsibilities and to release the hostages immediately.”