US sends Hellfire missiles to Iraq

AP: The U.S. has sent Hellfire air-to-ground missiles to Iraq’s air forces, which is using them in an ongoing campaign against the country’s branch of al-Qaida, officials in Washington and Baghdad said Thursday. 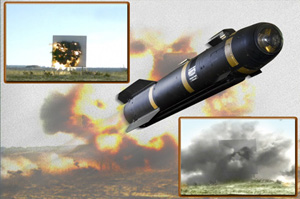 BAGHDAD (AP) — The U.S. has sent Hellfire air-to-ground missiles to Iraq’s air forces, which is using them in an ongoing campaign against the country’s branch of al-Qaida, officials in Washington and Baghdad said Thursday.

Two Iraqi intelligence officers and a military officer said that 75 Hellfires arrived on Dec. 19 and more will be shipped in the future.

They said the missiles are being used now by four Iraqi King Air propeller planes during a large-scale military operation in the western desert near the borders with Syria. An intelligence official said that the missiles were proven “successful” and were used to destroy four militant camps.

Jen Psaki, a spokeswoman for the U.S. State Department, confirmed the missile shipment and also said that the United States was planning on sending ScanEagle drones.

“The United States is committed to supporting Iraq in its fight against terrorism through the Strategic Framework Agreement,” she said, referring to a 2008 pact between the two nations. “The recent delivery of Hellfire missiles and an upcoming delivery of ScanEagles are standard foreign military sales cases that we have with Iraq to strengthen their capabilities to combat this threat.”

Hellfires are widely used by U.S. forces in their campaign against al-Qaida, often targeting militant hideouts or vehicles.

Iraq launched its operation in the largely desert province of Anbar followed the weekend killing of a senior military commander, a colonel and five soldiers in an ambush.

Al-Qaida is believed to have made use of the war in Syria, which borders Anbar, to rebuild its organization in Iraq. Hard-line fighters are believed to shuttle between the two countries.

According to U.N. estimates, more than 8,000 people have been killed since the start of the year in Iraq.

Also on Thursday, a salvo of rockets hit a camp that houses members of an Iranian opposition group that is at odds with the government in Baghdad, Iraqi officials and the group’s parent organization said.

The Paris-based National Council of Resistance of Iran said in an emailed message that “dozens” of rockets killed two of its members in the attack on Camp Liberty near Baghdad Airport, giving their names. It said others were wounded.

An Iraqi security official said four rockets hit the camp and that two people were wounded, none killed. It said three more rockets hit a nearby Iraqi military camp without causing damage.

It was impossible to immediately reconcile the conflicting accounts.

Psaki said the U.S. condemns the attack “in the strongest terms” and called on the Iraqi government to take additional measures to better secure the camp.

The group, which is strongly opposed to Iran’s clerical regime, was welcomed into Iraq by Saddam Hussein in the 1980s during the war with neighboring Iran. Their fortunes turned sharply with the Iraqi dictator’s toppling in the 2003 U.S.-led invasion. Iraq’s current Shiite-led Iraqi government, which has strengthened ties with Tehran, considers their presence in the country illegal.

A disputed Sept. 1 shooting at their longtime home in Camp Ashraf killed 52 MEK members – roughly half of the camp’s remaining population. The dissidents accuse Iraqi security forces of carrying out the killings. Baghdad denies involvement, with officials saying an internal dispute was to blame.

Meanwhile, a bomb attached to a bus meanwhile killed three civilians and wounded six in the southern Baghdad neighborhood of Jisr Diala, a security and a medical source said.

The Iraqi officials spoke on condition of anonymity as they were not authorized to release information.

AP writer Deb Riechmann in Washington contributed to this report.

Iran tells US forces to get out of Iraq

AFP: Iran's hardline president on Wednesday called on US...

Many parts of the recent Iran-China 25-year contract remain...