AFP: An exiled Iranian opposition group on Sunday called for the United Nations to probe the deaths of dozens of Iranian dissidents in Iraq, which it blames on the Tehran-friendly government of Baghdad. 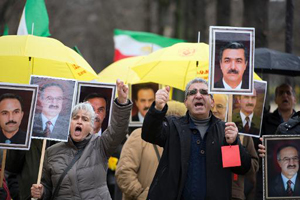 Paris (AFP) — An exiled Iranian opposition group on Sunday called for the United Nations to probe the deaths of dozens of Iranian dissidents in Iraq, which it blames on the Tehran-friendly government of Baghdad.

The call came ten days after a rocket attack on Camp Liberty, which houses exiled Iranian dissidents near Baghdad airport, left four dead according to the France-based National Council of Resistance of Iran.

Camp Liberty, a former US military base, is home to some 3,000 members of Iran’s main opposition group, the People’s Mujahedeen Organisation of Iran (PMOI).

In September, an attack on the PMOI’s former Ashraf camp saw 52 people shot dead in an incident the Iraqi government blames on PMOI in-fighting but the exiles attribute to the Baghdad government, which they believe launched the assault at the demand of Tehran.

In a statement, the council — which groups together several opposition groups — said its leader Maryam Rajavi called for “the launch of an independent probe by the United Nations on the rocket attacks and massacres of Iranian refugees in Iraq”.

The PMOI was founded in the 1960s to oppose the shah of Iran and later the country’s clerical rulers.

The group set up camp in Iraq during Saddam Hussein’s war with Iran in the 1980s, but was disarmed after the US-led invasion of Iraq in 2003 toppled Hussein,

Today’s Shia-majority and Iran-friendly government in Baghdad is eager to see it move elsewhere.

Scores of PMOI members have been killed in more than a dozen attacks on their camps since US troops withdrew from Iraq at the end of 2011.

Gates points to Iran as source of weapons to Taliban

Xinhuanet: Iran said on Sunday that it might halt...