Iran Focus: “Iraq is plummeting rapidly towards civil war and genocide,” senior EU lawmaker Struan Stevenson MEP who chairs the European Parliament’s Delegation for Relations with Iraq said in a press release. Stevenson says that an onslaught against supposed Al Qaeda terrorists in 6 Iraqi Provinces is no more than a cover for the “annihilation of Sunnis opposed to the increasingly sectarian Shia policies of Prime Minister Nouri al-Maliki.” 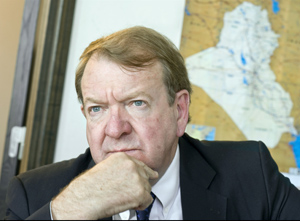 “Iraq is plummeting rapidly towards civil war and genocide,” according to a senior EU lawmaker Struan Stevenson, a Conservative Euro MP from Scotland who chairs the European Parliament’s important Delegation for Relations with Iraq. Stevenson says that an onslaught against supposed Al Qaeda terrorists in 6 Iraqi Provinces is no more than a cover for the “annihilation of Sunnis opposed to the increasingly sectarian Shia policies of Prime Minister Nouri al-Maliki.”

“When I visited Iraq in November I met with many of the leading Sunnis who had organised protests and demonstrations against Maliki in Anbar and Kirkuk and other Sunni Provinces. I also met with the Grand Mufti, one of only 2 religious leaders of the Sunnis in Iraq. All of them told me in detail how they were under constant attack by Maliki’s forces and how often these forces would be infiltrated by highly-trained assassins from Iran, who could be identified easily because they spoke Farsi rather than Arabic. They told me how thousands of Sunnis have been killed in these attacks and how Sunni Imams and mosques were being ruthlessly targeted.

“Maliki’s determined efforts to eradicate all leading Sunnis from the Iraqi government, including trumped-up charges of terrorism against the leading humanitarian, Vice President of Iraq Tariq al-Hashemi, has led to an upsurge of protests which have continued for more almost two years. The last straw was the violent arrest of the senior Sunni MP and Chair of the Iraqi Parliament’s Economics committee – Dr Ahmad Alwani – on 28th December, when an assault force of 50 armoured vehicles, helicopter gunships and hundreds of heavily armed troops massacred 9 members of his family and arrested him and over 150 of his staff on baseless charges of terrorism. Dr Alwani has been a key critic of Maliki and of Iranian meddling in Iraq.

“Just as I was told in November, Maliki’s ploy, aided and abetted by the mullahs in Iran, is to label all of the Sunnis as terrorists, claiming that they are active members of Al Qaeda. In fact I have been assured that there are no foreigners involved in the uprisings in the 6 Sunni Provinces. Although some Al Qaeda jihadists had infiltrated Ramadi in al-Anbar Province, near the Syrian border, they were quickly driven out by the locals. The people who have now taken up arms against Maliki’s forces are ordinary Iraqi citizens, forced to defend themselves against a ruthless dictator. Shamefully, the Obama administration has fallen for this ploy and supplied Maliki with, 75 Hellfire air-to-ground missiles which are now raining down on his own people in Ramadi and other Sunni cities. 10 reconnaissance drones are expected to follow in March, with a further 48 drones and the first of a batch of F-16 fighter jets later in the year.

“The Americans seem unable to accept the fact that their blundering intervention in Iraq has so far led to over 1 million Iraqi deaths, changed that oil-rich nation into a virtual basket-case and simply replaced the brutal Saddam Hussein with another corrupt and bloody dictator in Nouri al-Maliki. Providing him with US arms to wage outright war on the Sunni minority in Iraq, as the Iranian mullahs cheer from the side-lines, will solve nothing and will certainly lead to civil conflict. The only solution is to remove Maliki from office and replace him with a non-sectarian government of all the people, which respects freedom, democracy, human rights, women’s rights and the rule of law and stops the growing interference from Tehran. Even senior Shias whom I met in Iraq have voiced their concern over Maliki’s malign regime.

For the Americans to hide behind Maliki’s lies and fabrications that Al Qaeda terrorists have taken over Ramadi and Fallujah and other Sunni cities will pave the way to the genocide of Iraq’s Sunni population.”

President of the European Parliament’s Delegation for Relations with Iraq