Bloomberg: Iraqi military helicopters attacked positions held by Sunni Muslim militants north of Baghdad as the U.S. moved an aircraft carrier into the Persian Gulf for possible air strikes to support the Shiite-led government. More than 130 members of Iran’s Islamic Revolutionary Guard Corps have entered the eastern province of Diyala. 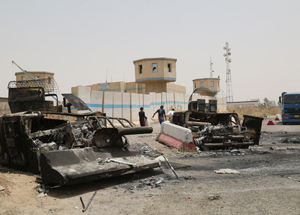 Iraqi military helicopters attacked positions held by Sunni Muslim militants north of Baghdad as the U.S. moved an aircraft carrier into the Persian Gulf for possible air strikes to support the Shiite-led government.

The attacks yesterday in areas including the northern province of Nineveh killed a “great number of” gunmen belonging to the Islamic State in Iraq and the Levant, or ISIL, Iraq’s Defense Ministry said on its website.

The government is seeking to regain territory held by the Sunni militant group, an offshoot of al-Qaeda, whose advance after capturing the city of Mosul last week put in doubt Prime Minister Nouri al-Maliki’s rule over a unified Iraq, as OPEC’s second-largest oil producer slides toward civil war.

The carrier USS George H.W. Bush, which has been in the North Arabian Sea, will provide “additional flexibility should military options be required to protect American lives, citizens and interests in Iraq,” the Pentagon said yesterday in announcing its deployment. It was accompanied by the guided-missile cruiser USS Philippine Sea and the guided-missile destroyer USS Truxtun, said the Pentagon press secretary, Rear Admiral John Kirby.

While U.S. President Barack Obama remains reluctant to order the use of military force in Iraq again after ending U.S. troop involvement there in 2011, moving the warships into the Persian Gulf is a signal to Maliki that the U.S. is willing and able to do so if the Iraqi leader seeks some reconciliation with moderate Sunnis, two U.S. officials involved in the decision making said yesterday.

Speaking on condition of anonymity because they aren’t authorized to discuss the matter publicly, both said the move also is a warning to ISIL and its allies, and provides capabilities in case American facilities in Iraq need to be defended or evacuated.

Still, designating and positioning military assets “is easier than actually getting the information and intelligence that we would need to target any kinds of strikes,” Brian Katulis, a senior fellow at the Center for American Progress, a Washington policy organization, said in a phone interview.

Katulis said Obama is right to use the pressure of the moment to try to win political concessions from Maliki, who has alienated Sunni and Kurdish minorities by actions favoring Shiites, including pay and promotions in the military.

“I wouldn’t hold my breath on that one,” he said. Referring to Maliki, he added: “If you look at his record since 2006, it’s not encouraging.”

The advance of ISIL, which is also fighting in Syria’s civil war, has been abetted by Sunni factions of ousted Sunni President Saddam Hussein’s former Baathist regime and tribal groups disillusioned with the Shiite-led government. Still, the Iraqi premier is not without Sunni support.

“We’ve been fighting al-Qaeda in Anbar for the past six months and we’re ready to fight for another six months, but we need American support,” he said in a phone interview yesterday from Ramadi in western Iraq. The U.S. “must take the decision to stage air strikes against the militants or send troops again to Iraq, even if it’s for a limited time.”

Signs surfaced that it already is doing so. More than 130 members of Iran’s Islamic Revolutionary Guard Corps have entered the eastern province of Diyala, the BBC reported. Dozens of Iraqis were also seen gathering at centers in Baghdad yesterday to volunteer in the fight against ISIL, in footage aired by SkyNews Arabia.

AFP: An Iranian helicopter of the Revolutionary Guards crashed...