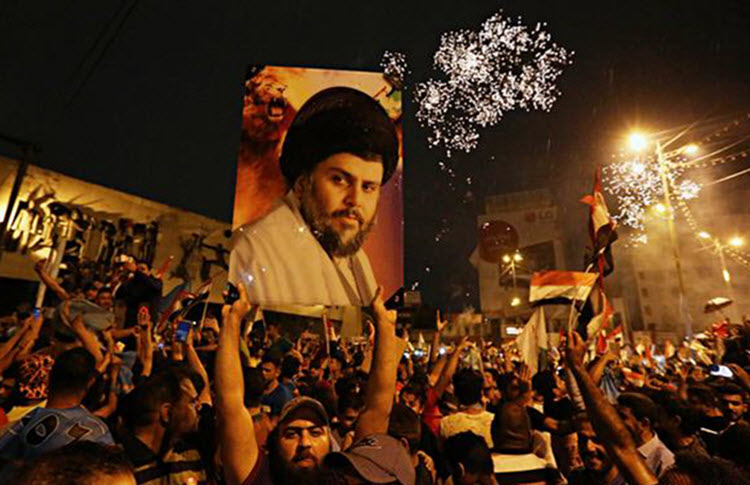 London, 23 May – It has been reported that the United States has been indirectly in touch with Moqtada Al Sadr following the Iraqi election result that surprised many. Al Sadr – a former foe, has forced the US to work with his political bloc to ensure its interests in Iraq are safeguarded.

Al Sadr – a Shiite cleric – gained victory in the parliamentary elections meaning that he will be in a position to greatly influence the formation of the new Iraqi government and the appointment of a new prime minister.

During the American occupation of Iraq, Al Sadr led the Mahdi Army which was often involved in serious and brutal conflicts with the United States forces.

One of his main aides Dhiaa Al Asadi has said that the Al Sadrist movement has no plans to “reinvent or invoke” the Mahdi Army. “There’s no return to square one. We are not intending on having any military force other than the official military force, police forces and security forces.”

He said that although there have not been any direct talks between Al Sadr and the US, there have been discussions via intermediaries.

There are several thousand American military personnel members in Iraq at the minute who are involved mostly in training the Iraqi forces.

Al Sadr is a nationalist that has made it clear he is unhappy with the presence of Iran in Iraq. Many have said that his sudden rise in popularity is due to his openness about the malign influence Iran has in his country – something that the Iraqi public is becoming more and more aware and wary of.

Many people and officials in Iraq have said that Iran is backing a corrupt political elite in the country and is trying to exert as much influence as it can to one day increase its control. Iran is funding, arming and training Shiite militias in Iraq and it has the trust of a large number of Iraqi politicians.

Like Al Sadr, US President Donald Trump has made his contempt for Iran’s regional interference known and he has vowed on many occasions to continue doing what he can to curb the threat that extends far beyond the Middle East.

He has said that he wants to increase sanctions against Iran unless it is prepared to make major changes. The United States has also called on Iran to leave Syria where it has been supporting dictator Bashar al Assad for years.

Iran is trying to spread its influence across the region and its meddling is fuelling existing conflicts and sparking new ones. Iran is present, in one way or another, in all of the conflicts in the region. If Iran had not got involved in the Syrian civil war, it would have ended years ago.

The people of Iran are fed up with the Iran’s interference abroad too. There are many social problems in Iran and the people are calling for regime change so that they can one day experience freedom, democracy and peace.