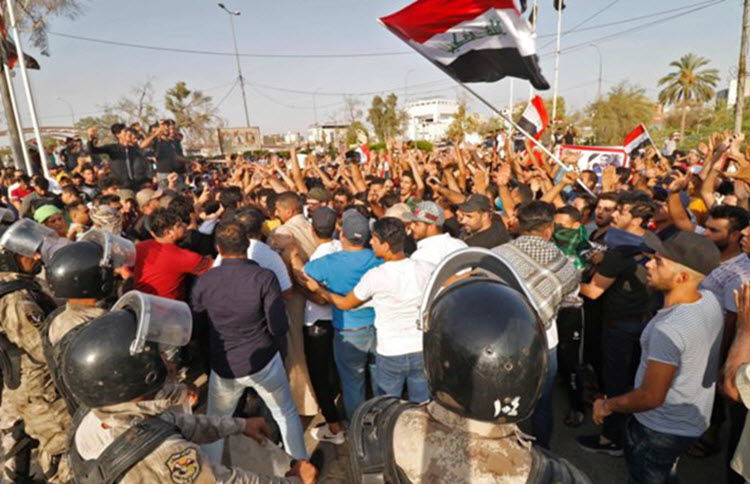 London, 15 Sep – The city of Basra endures high unemployment, failed healthcare and education systems, drug processing and smuggling, as well as thousands of landmines from past wars surrounding the city. Brackish water flows through its pipes. Militias – the armed wings of Shia political parties, who fight against ISIS – tyrannize its people. The river is filled with sewage and sickness.

The shared Shiite faith has been used by Iran to exploit Iraq’s wealth rather than build up its people. Many Iraqis are tired of Iran treating Iraq like its own backyard, which culminated in an explosion of fury in Basra this past week. Thousands of citizens took to the streets to demand their rights.

The majority of the demonstrators are young people who were children when the United States, the United Kingdom, and others invaded Iraq in 2003 and toppled the ruling sysgtem — an act that led to Iran’s expanded influence through the Shia parties that took power in Baghdad.

While the demonstrations began peacefully, soon pro-Iranian parties and Iran itself seized on the issue. The protesters were met with violence from government authorities. Live bullets fired by the military and police, killing and wounding many.

The true meaning of this mass mobilization has been ignored. The people are angry because bribery has flourished, with a “percentage” demanded by local officials, ministers, or party chiefs, which has adversely affected industry in Basra. Investors abandon projects in the face of arbitrary demands. Instead, Iranian construction companies, banks, and even hair salons replace Iraqi firms.

The amount of imported goods and services has increased, especially from Iran. In fact, most products in Basra are imported from Iran. The Islamic Republic is attempting to boost its exports to Iraq from $10bn to $15bn. Even the natural gas to run its power plants is imported from Iran, despite huge reserves of gas in Basra’s oil fields. The ministry of oil burns any gas produced in the extraction of oil, further polluting the environment. Although major oil companies have invested in Basra’s oil fields, the level of bribery they encounter is excessive.

In their original contracts, local development projects promised to combat the fumes and smoke from the oil wells. Despite the claims by chief negotiator and former oil minister Hussain al-Shahristani, these efforts remain unseen. Basra is immersed in pollution that comes from an industry that was supposed to be its savior.

Religious pilgrims lovingly described Basra’s swamps and rivers in their travelogues. Now, they are garbage dumps, and each September and October they are infected with cholera. Also concerning is the agricultural runoff and pollution that drains into the Shatt al-Arab waterway from Iranian fields. Saltwater is driven up the Tigris and Euphrates rivers, creating an environmental catastrophe for livestock and fisheries.

With its sons lost in battle and its natural wealth used to finance the campaign, Basra played a large part in the victory over ISIS. Now Basra’s standard of living declines, as that same wealth goes to rebuild liberated areas. The government must demonstrate that they put the health and security of Iraq first and eliminate the destructive role of the Iranian regime.