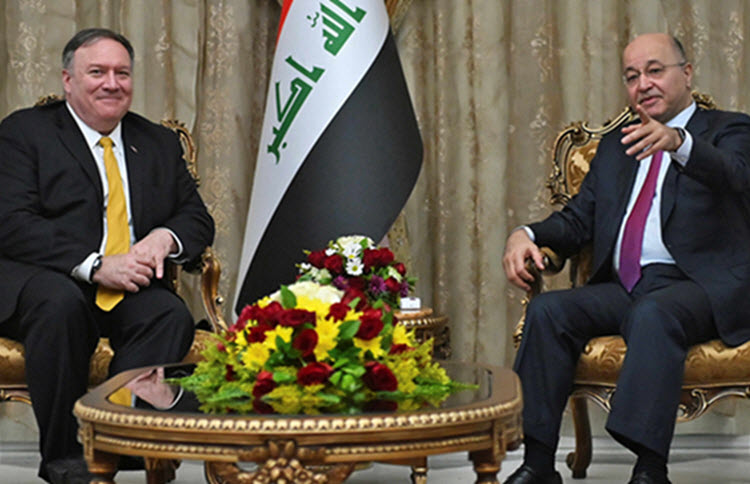 US Secretary of State Mike Pompeo has made an unscheduled trip to Iraq, as US-Iran tensions rise.

Pompeo spent four hours in Baghdad yesterday, after cancelling a trip to Berlin, in order to assure the leaders that the US didn’t want anybody “interfering” in Iraq and to call on the Iraqi government to protect US troops stationed there.

He met with Iraqi Prime Minister Adil Abdul-Mahdi and President Barham Salih to explain the US’s concerns and Pompeo said that both men “provided assurances that they understood that was their responsibility” to protect US citizens and troops in their country.

Pompeo said: “We wanted them to know about the increased threat stream that we had seen, to give them a little bit more background so that they would have enough information that they could ensure that they were doing all that they could to provide protection for our team. They understood, too, it’s important for their country. We don’t want anybody interfering in their country, certainly not by attacking another nation inside of Iraq, and there was complete agreement.”

He then told a reporter that the US is ready to protect Iraq’s sovereignty and help them become less energy dependent on Iran.

This visit came just a couple of days after the US deployed aircraft carrier USS Abraham Lincoln to the Middle East in response to Iranian threats on US forces and allies. The US has not gone into details on the threat, but US national security adviser John Bolton referred to them as “troubling and escalatory”.

Bolton said the purpose was to send “a clear and unmistakable message to Iran that any attack on United States interest or on those of our allies will be met with unrelenting force”. While Acting Pentagon spokesman Charles Summers said the US does “not seek war with the Iranian regime, but we will defend US personnel, our allies and our interests in the region”.

Iran has responded with a lot of bluster, as usual, but have not done anything concrete as they know they are no match for the military might of the US and its allies.

US-Iran relations have been fraught since Donald Trump took office in 2017 and began his “maximum pressure” campaign against Iran. Last May, Trump pulled out of the 2015 Iran nuclear deal, which lifted sanctions in exchange for restrictions on Iran’s nuclear program. Trump said the restrictions were never enforced and that Iran’s malign actions went far beyond its nuclear activities.

Since then, Trump has reinstated sanctions and designated Iran’s elite Revolutionary Guard Corps (IRGC) as a terrorist group.