Iraqis Determined to Continue Their Uprisings Until the End 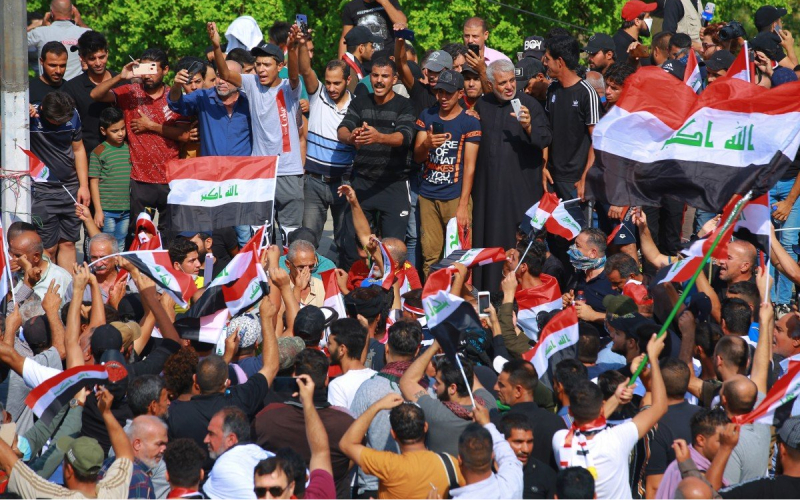 In Iraq, Baghdad, the Green Zone, and Tahrir square are physically only one mile apart., But metaphorically, they’re in different worlds. While Tahrir Square is hosting protesters around the clock, Green Zone, where the corrupt rulers of Iraq are cowering, is as quiet as a library. It is unlikely, but maybe Iran-backed lawmakers and ministers are packing their bags to vanish altogether, which is what Iraqis demand.

for over a month, a struggle has been taking place across the country, from the streets of Capital Baghdad to mostly Shiite-dominated provinces in the south. The struggle aims to specify who shape the country’s future. A new generation of Iraqi intends to get rid of the Iran-linked government, take back their country, and establish an independent ruling system. In response, the Iranian government’s surrogates decided to crackdown on the protests at all costs.

In this regard, on October 30, Iran’s Supreme Leader Ali Khamenei recommended the Iraqi and Lebanese people [read “his allies in both government”] that, “The people of Iraq and Lebanon should know that their priority should be security.“ Immediately after Ali Khamenei’s remarks, commander of the Revolutionary Guards (IRGC)’s Quds Force Qasem Soleimani attended Baghdad and employed snipers and black-masked plainclothes men to attack the demonstrators.

It is unfortunate that Iran exploited two great miscalculations by two different U.S. administrations toward Iraq. Ayatollahs seized the exceptional opportunity of invasion to Iraq. They formed a governing system of dividing political power along religious and ethnic lines that guaranteed their long influence in this country.

Notably, since 2004, all the Iraqi Prime Minister were assigned by Iran-aligned parties. Ebrahim Jafari, Noori al-Maliki, Heydar al-Abadi, and current prime minister Adil Abdul Mahdi previously lived in Iran and were backed by Iran’s funds. It is significant that in addition to the prime minister, at least five major ministries, including the interior, communications and labor and social affairs were presided by Iran-linked “politicians.”

Iraq’s recent unrest started with protests against corruption, lack of public services, unemployment, and etc. But quite expectedly, the Iraqi demonstrators turned their outrage toward Iran’s meddling in their nation’s affairs. Therefore, while the Iraqi politicians tried to quell the protests whether by tear gas and live ammunition or with hollow promises, Iraqi youths still persist and insist on their rightful demands.

Iraqi people seem to have discovered that these politicians don’t have the final say and that their country is led from elsewhere. Meanwhile, they directly targeted that occupier in their marches and rallies. Amazingly, Iraqi youths put up the portraits of Ali Khamenei and Soleimani with red Xs drawn and slap them by their shoes to insult them. They not only torched headquarters of Iran-back militias but also attacked Iran’s consulate and embassy.

Baghdad, #Iraq
Iraqis are seen showing their hatred to the images of Iranian regime Supreme Leader Ali Khamenei & IRGC Quds Force chief Qassem Soleimani as the source of all their country’s miseries.pic.twitter.com/Vx7VMYYv35

Iraqi demonstrators, who are present in the streets every day with flags around their necks, vehemently announced that “We will stay as long as protest take, we can demonstrate for a day, two days, a week, a year, 500 years.”