Iraq’s Head of Government Steps Down 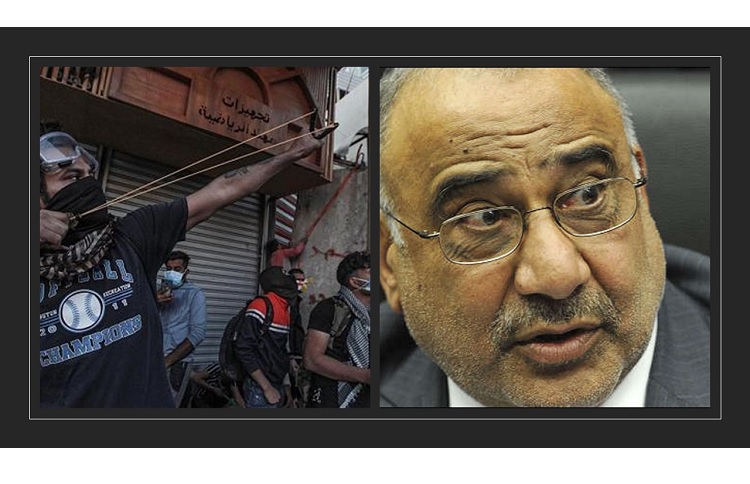 Sad record since the beginning of the crisis: 380 dead, 17,000 injured people

Iraq is still suffering from the consequences of Iran’s interfere since 2003. Now the country is tilting toward a big change while Prime Minister Adel Abdul Mahdi, as the supporter of Iranian benefits in Iraq, is stepping down.

After weeks of protests against the government, resulting in several hundred deaths and the overthrow of Prime Minister Adel Abdul Mahdi, Iraq’s political leadership is in shambles. But there is now hope for the Iraqi people, especially the youth, to rescue their country from the destructive interference of the Iranian government. Iran has been plundering the entire wealth of the Iraqi people and has forced them into civil conflicts for many years.

Abdul Mahdi announced on Friday he will submit his resignation to Parliament. Protesters in the capital Baghdad and other regions then burst out in cheers. This was the first step to end Iran’s interference in Iraq.

The demonstrations against the country’s political elite and widespread corruption broke out in early October. In Baghdad and the mostly Shiite-inhabited south of Iraq, young people took to the streets to vent their frustration at the government corruption and the destructive role of Iran in their country.

This is the biggest wave of protests since 2003. It goes along with similar demonstrations in Lebanon and Iran and is reminiscent of the uprisings in the Arab world in 2011.

Iraq’s protesters call for the resignation of the entire government, the dissolution of parliament and a new political system, a system created mostly under the influence of the Iranian regime. It distributes power among the major political blocs, which is considered the main reason for rampant corruption. Despite promises of reform, Abdul Mahdi failed to calm the situation.

At least 380 people have been killed in the demonstrations so far, as announced by the Parliament’s Human Rights Commission. Also, more than 17,000 people were injured. Most of the victims are protesters. Critics repeatedly accused the security forces – including a rapid army intervention force – of disproportionate use of force.

On Thursday, the country experienced one of the bloodiest days since the wave of protests began. Alone in the southern Iraqi city of Al-Nasiriyah, one of the main centers of protests, 32 people were killed when security forces opened fire on demonstrators, eyewitnesses said.

Abdul Mahdi said he wanted to prevent Iraq from slipping into more violence and chaos with his resignation. The pressure on him had increasingly grown in recent days.

The crisis-riddled country has not yet recovered from years of Iran’s crimes, a hidden bloody hand that has killed a lot of Iraqi people.

The country’s highest Shiite cleric, Ayatollah Ali al-Sistani, had previously called on Parliament in his Friday sermon to rethink the election of the government.

The mass protests and unrest in Iraq have a significance that extends beyond the country. Iran has steadily expanded its influence in the Arab world since 2003. Since then, Shiite politicians have been ruling Baghdad, with Iran controlling the neighboring country to their will.

This crescent is now in danger. The Iranian leadership had apparently not expected that in both Iraq and Lebanon mostly youthful protesters would rise against their influence.

Tehran is now being punished for its arrogance of power. The regime was convinced that the Shiite identity of Iranians and many Lebanese and Iraqis alone would be enough to consolidate Tehran’s power in the Levant. But with the protests in Iraq and Lebanon, a domestic struggle has erupted against Iran’s meddling, which could also shake the power structure of the regime—especially as the recent nationwide protests also question the legitimacy of the regime inside the country. After 16 years of expansion, Iran is back on the defensive.

The Independent: Iran is running international "training camps" for...

US calls on Syria, Iran to honor UN resolution on Lebanon