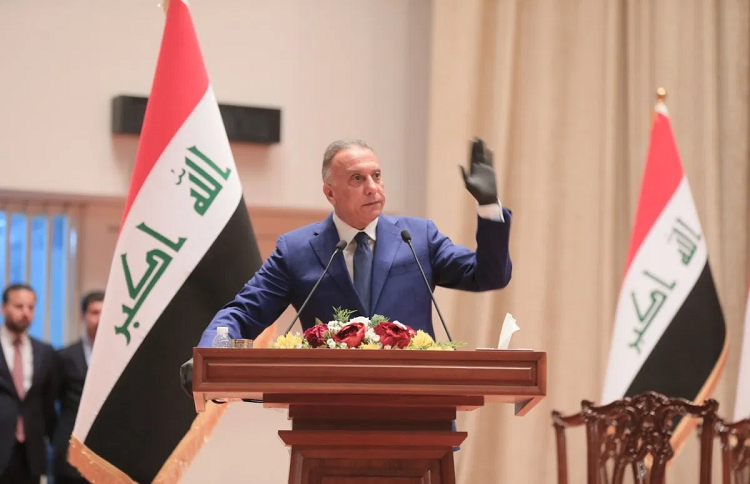 On July 21, Iraqi Prime Minister Mostafa al-Kadhimi entered Tehran at the head of a delegation, including ministers of foreign affairs, oil, electricity, treasury, defense, health, and the national security advisor.

The meeting with al-Kadhimi was Khamenei’s first in-person meeting after five months of quarantine, highlighting the importance of this event for Iranian authorities. In his joint press conference with the Iraqi PM, Rouhani described al-Kadhimi’s visit to Iran as a “turning point.” “The will of the two governments is to increase trade relations between the two countries to $20 billion,” Rouhani said.

“Iraq won’t allow threats to Iran from its soil. Iran and Iraq both are suffering from economic challenges and problems,” said the Iraqi PM in the same press conference.

Was the One-day Trip of Iraqi PM to Tehran Actually A Turning Point?

In meetings with the Iraqi delegation, Iranian authorities frequently insisted on three demands, including U.S. withdrawal from Iraq, the pursuit of the death of the former commander of Revolutionary Guard (IRGC)’s Quds Force Qassem Soleimani, and economic collaborations.

The first two issues have no follow-up actions and are likely to be government publicity slogans. However, serious talks were only over economic collaborations. In such circumstances, Iranian authorities are under severe pressure both inside and abroad, and financial troubles have placed their rule on the verge of collapse.

In this respect, they view Iraq as a window of salvation and hope to ease the pressure that has become a security issue by getting help from their eastern neighbor. Of course, this route is not likely to benefit the ayatollahs due to strong ties between the new Iraqi government and the U.S. and Saudi Arabia.

The change in Iranian officials’ tone and their weak position was clear in al-Kadhimi’s meetings. Previously, Iranian authorities, including Khamenei, had frankly been issuing orders for the Iraqi government and people. For instance, in 2008, Khamenei flagrantly ordered Iraq’s former president Jalal Talebani to expel Iranian opposition Mojahedin-e Khalq (MEK) from Iraq in short order. Or in last October, he openly ordered his cronies in Iraq to crack down on Iraqi protesters, and Qassem Soleimani personally oversaw the suppression of the Iraqi “October Revolution.”

However, contrary to previous years, this time, Khamenei said, “I expect you to pursue the decision of the Iraqi government, nation, and parliament to expel Americans.” He also claimed, “We want Iraq to achieve its regional position.” This is while Iran is the first violator of Iraq’s sovereignty. Millions of Iraqis flooded into the streets and brought down Adil Abdul Mahdi, al-Kadhimi’s predecessor, to end the Iranian government’s influence.

As another attestation to the Iranian government’s weakness, Khamenei said, “We want Iraq to have relationships with all.” In this respect, on July 21, the Rouhani administration spokesperson Ali Rabiei revealed his superiors’ purpose for communicating with their “enemies.” In response to a question about the possibility of al-Kadhimi mediating between Iran and the U.S. or Saudi Arabia, Rabiei said, “We welcome any mediation.”

However, al-Kadhimi dismayed Iran’s leaders by not conforming to their desires. “In Tehran, al-Kadhimi said Iraq’s foreign policy is based on ‘balance and avoiding any alignment.’ The Iraqi premier said his country seeks to improve relations with Iran ‘based on non-intervention in domestic affairs of the two countries,’” the Associated Press reported on July 21.

Therefore, al-Kadhimi’s trip to Iran shows the Iranian government’s influence on Iraq’s political elite is waning and the ayatollahs’ efforts have remained fruitless so far. “Tehran’s influence in Baghdad has also diminished since [Qassem] Soleimani’s assassination and even the trips of Ali Shamkhani and [IRGC Quds Force commander Esmail] Gha’ani couldn’t return our relationship with Iraq to its previous state. Several analyses spell Mostafa al-Kadhimi’s intention to Washington and Riyadh as debilitation of the [Iranian] state’s interference in regional developments, particularly in Baghdad,” wrote Iranian Jahan-e Sanat daily on July 22.

Iran strengthens its backing for Assad

AFP: Iran condemned on Wednesday what it said was...