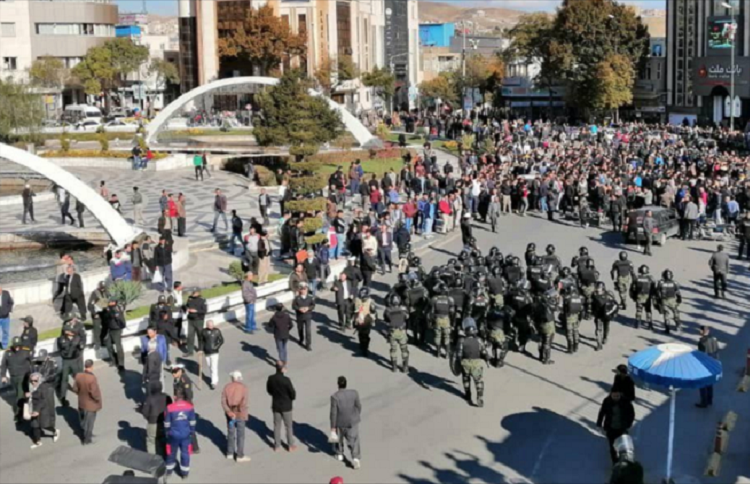 Following the November 2019 nationwide protests and the Iranian regime’s bloody crackdown on hundreds of thousands of citizens who merely complained about gasoline price hikes, the gap between the society and the ruling system became visible more than ever before.

Millions of people who live under onerous socioeconomic pressures and rulers with staller wealth have stood on both sides of this gap. In other words, there is a full-scale war. The people obviously and frequently chant slogans, “Death to [the supreme leader Ali] Khamenei,” “Death to [President Hassan] Rouhani,” and “We don’t want clerical rule.” In response, the ayatollahs do their ‘best’ to silence any opposition voice.

In November 2019, Khamenei ordered the Islamic Revolutionary Guard Corps (IRGC) to “Do whatever it takes to end” the protests. Furthermore, the government and the Majlis (parliament) escalate social pressures under the pretext of religious laws on a daily basis.

Authorities imply the most extreme measures against women and youths for their attire. At the same time, they turn a blind eye on unbridled poverty, forcing a large branch of the society’s low and middle-income segments to sell their organs, or even babies, to make ends meet.

“People will sack us from the parliament and authorities from the government. It won’t take much time. Why have you closed your eyes and ears, and don’t pay attention?” said Hossein Ali Shahryari, an MP from the city of Zahedan in Sistan & Baluchestan province, on July 19.

Ordinary people are mocking the officials. “My sister keeps your hijab and doesn’t care about the wildfires,” in reference to ongoing fires across the country and regime officials refusing to take adequate action. Others are also heard chanting, “25-year deal with China, starvation, national currency devaluation, high prices, etc. You just keep your hijab.” This is an expression of the people’s anger regarding the regime’s sell-off agreement with China.

On the other hand, authorities have left the society to opt between the novel coronavirus and starvation. Despite his multi-billion-dollar empire, Khamenei denies providing adequate capital to Iran’s health apparatus to save the nation form the novel coronavirus, being the world’s most acute health crisis. He, along with his affiliated financial institutions and economic holdings, are also reluctant to aid millions of citizens who live below the poverty and misery lines.

Some while ago, Khamenei was compelled to agree with the allocation of only “one billion dollars” from the “National Development Fund,” and not his skyrocketing capital, to the health apparatus. However, nearly two months later, on July 9, Health Minister Saeed Namaki said, “We have received less than 30 percent of the one billion dollars to fight coronavirus.”

“Officials are blaming everything on the people. They should be reporting on what they have done and are doing? How many ICU [beds] did they provide? How much longer must the people die while waiting for the ICU to clear up? How much oxygen did they provide? The people are dying due to a lack of oxygen… They should get a hold of themselves! It’s as if they have sworn to kill all the people!” said Amanghlich Shadmehr, an MP from the city of Gonbad Kavus in Golestan province, on July 22.

While containing COVID-19 is the priority of many governments, Iranian authorities are abusing this deadly disease as an instrument to pass socioeconomic crises and quell public grievances. They have practically entrenched with coronavirus victims against the society’s rage.

In this respect, Khamenei and Rouhani would not contain the health crisis, but they use it to amplify oppressive measures. They simultaneously continued their inhuman crimes amid the coronavirus, including the execution of political prisoners and even an ordinary citizen with two kids for drinking alcohol, arresting social activists who have established a charity organization to aid underprivileged people, issuing the death penalty for November 2019 protesters, jailing, flogging, and fining social activists who complained to the IRGC for killing porters and leaving thousands of defenseless prisoners in contaminated wards despite the coronavirus pandemic.

However, on July 20, judiciary chief Ebrahim Raisi frankly expressed the regime’s redline, while 25 million Iranians have contracted the coronavirus, and 35 million others are at risk, according to the president. “Our redline is chaos and unrest in the country,” Raisi said.

This shows that the ayatollahs’ problem is neither “economic conditions” nor the ongoing “health crisis” claiming hundreds of lives every day. Moreover, they are absolutely not concerned over “foreign threats” but they see the Iranian people as a substantial risk against their survival and do whatever it takes to defeat this “enemy.”

On the other hand, Iranian citizens have clearly shown that they believe their country won’t reach prosperity and welfare with a clerical regime. Thus, they are shouting their desire: “The mullahs must get lost.”

AP: Iran officially confirmed that it has stepped up...