Bloomberg: As additional evidence of the Syrian regime’s complicity, the report said the U.S. intercepted communications involving a senior Syrian official “who confirmed that chemical weapons were used by the regime on August 21 and was concerned” that a United Nations team investigating the attack would obtain evidence. 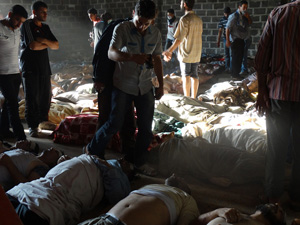 Left unaddressed in the four-page, unclassified version of the Obama administration’s assessment, released yesterday, is any discussion of who in the Syrian government gave the order to use the weapons and whether a rogue element of the regime could have been responsible.

“The thing that’s unproven in the public document is this chain-of-command issue,” said Brian Katulis, a senior fellow at the Center for American Progress in Washington who has worked in the Middle East. “They either can’t address it publicly or they don’t have the information.”

Any such shortcoming in U.S. intelligence invites criticism a decade after President George W. Bush made a case for invading Iraq based on false claims that Iraqi dictator Saddam Hussein possessed chemical and biological weapons.

“Most people wouldn’t find this as a smoking gun and the sharpest argument for military action,” Katulis said yesterday in an interview. “They built as strong a public case as I think they can make. They’re convinced they’re not going to win everybody over.”

The report assesses “with high confidence” that the Syrian government conducted a chemical weapons attack in a Damascus suburb on Aug. 21 that killed 1,429 people, including at least 426 children.

That estimate differed from a U.K. government assessment issued Aug. 29 that said the overall death toll was “at least 350 fatalities.”

An Obama administration official who asked not to be identified discussing intelligence matters told reporters yesterday that Assad is responsible for the use of chemical weapons by his regime, regardless of whether he gave a specific order.

Secretary of State John Kerry, discussing what he called “the indiscriminate, inconceivable horror of chemical weapons,” also blamed the Syrian president. “This is what Assad did to his own people,” he told reporters at the State Department yesterday.

Paul Pillar, a former national intelligence officer for the Near East and South Asia, said the report’s failure to link the attack directly to Assad or senior Syrian commanders may handicap the White House in making the case for a military strike.

“What sort of message does that really send to Bashar Assad or others in that administration if, in fact, they did not decide to use chemical weapons?” Pillar, a nonresident senior fellow at Georgetown University’s Center for Security Studies in Washington, said in an interview. “I don’t think you can wash that issue away by saying the guy at the top is in charge of everything.”

Three U.S. officials familiar with the intelligence on the attack, who asked not to be identified, said it’s difficult to confirm whether Assad or a member of his inner circle ordered the attack, or whether some army officer such as Assad’s brother Maher, who commands the elite 4th Armored Division, might have launched it.

The unclassified report does seek to provide — without evidence — an answer to why the Syrian regime would use chemical weapons that could trigger an international response at a time when Assad’s forces have made headway with the help of fighters from Iran and Hezbollah.

“We assess that the Syrian regime has used chemical weapons over the last year primarily to gain the upper hand or break a stalemate in areas where it has struggled to seize and hold strategically valuable territory,” the report said.

The regime’s “frustration with its inability to secure large portions of Damascus may have contributed to its decision to use chemical weapons on August 21,” it said.

Pillar cautioned that any assessment in an unclassified report amounts to “looking at a fogged-over window” because of all the additional information the U.S. may have but can’t disclose without compromising sources and methods of intelligence-gathering.

Even so, he said, if there were any evidence of an order from Assad or senior commanders “we would have seen some indication of that reflected in the unclassified document.”

According to the report, in the three days leading up to the attack, the U.S. obtained “human, signals and geospatial intelligence that reveal regime activities that we assess were associated with preparations for a chemical-weapons attack.”

Syrian chemical-weapons personnel were operating in the Damascus suburb of Adra from Aug. 18 to 21 “near an area that the regime uses to mix chemical weapons, including sarin,” the report said.

A Syrian “regime element” prepared for a chemical attack on Aug. 21, including by using gas masks, it said.

The report didn’t say whether U.S. officials were aware of the preparations in the days leading up to the attack or whether they tried to do anything about it.

As additional evidence of the Syrian regime’s complicity, the report said the U.S. intercepted communications involving a senior Syrian official “who confirmed that chemical weapons were used by the regime on August 21 and was concerned” that a United Nations team investigating the attack would obtain evidence.

The U.S. also has intelligence showing that Syrian chemical-weapons personnel were ordered to cease operations that afternoon, the report said.
Launch Area

Discounting the possibility of an attack waged by the Syrian opposition seeking to overthrow Assad, Kerry said yesterday the chemical weapons were launched from territory controlled by the regime and targeted areas that were controlled by the opposition or contested by both sides. The report said “satellite detections” corroborate that assertion.

A scenario in which the “opposition executed the attack on Aug. 21 is highly unlikely,” according to the report.

“The case is very solid,” said Michael O’Hanlon, a defense analyst at the Brookings Institution in Washington.

Knowing where the rockets were launched, who prepared the attack and who suffered from it, and intercepts among Assad’s forces about wearing gas masks makes the report “a very, very compelling case,” he said by e-mail.

Although the report doesn’t offer proof that Assad ordered the attack, O’Hanlon said a punitive strike wouldn’t be designed to kill the Syrian leader “so it may not matter that much.”

President Barack Obama said yesterday that any military action would stop short of an “open-ended commitment” with U.S. troops on the ground. He said it would be designed to “meet the narrow concern around chemical weapons, understanding that there’s not going to be a solely military solution to the underlying conflict and tragedy that’s taking place in Syria.”

The administration official who briefed reporters yesterday acknowledged that the U.S. lacks physiological evidence of the chemical weapons attack, saying the collection of such samples would require more time.

UN inspectors are gathering that evidence and are scheduled to leave Syria today. Their report may take weeks to prepare because of the time required to complete laboratory work, according to a UN official who wasn’t authorized to comment and asked not to be identified.

Instead, the U.S. report relied partly on social media as evidence, citing 100 videos that show “large numbers of bodies exhibiting physical signs consistent with, but not unique to, nerve agent exposure.”

“We assess the Syrian opposition does not have the capability to fabricate all of the videos, physical symptoms verified by medical personnel” and other information about the attack, the report said.

Kerry said some of the intelligence gathered by the U.S. remains classified and can only be shared with members of Congress.

“Our intelligence community has carefully reviewed and re-reviewed information regarding this attack,” Kerry said. “And I will tell you it has done so more than mindful of the Iraq experience. We will not repeat that moment.”

Bloomberg: Iran may base its budget for the next...