Iran says it has ‘evidence’ scientist abducted by CIA

AFP: Iran has submitted “evidence” to the Swiss embassy that its nuclear scientist was abducted by US intelligence agents, the English language Press TV website reported on Sunday. 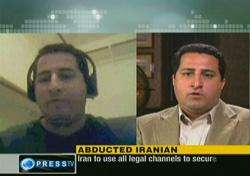 TEHRAN (AFP) — Iran has submitted “evidence” to the Swiss embassy that its nuclear scientist was abducted by US intelligence agents, the English language Press TV website reported on Sunday.

“The evidence related to the abduction of Shahram Amiri by the CIA (Central Intelligence Agency) has been handed over to the Swiss embassy in Tehran” foreign ministry spokesman Ramin Mehmanaparast was quoted as saying.

The Swiss embassy manages US interests in Iran since Washington and Tehran have no diplomatic ties.

“We expect that based on the US administration’s obligations… the US authorities will announce the results of their investigation regarding this Iranian national,” Mehmanaparast said.

Iranian officials have long maintained that Amiri was kidnapped by US agents from Saudi Arabia last year.

On June 29, Iranian television had screened a video of a man claiming to be Amiri and saying that he had managed to escape from the hands of US intelligence agents in Virginia.

“I could be re-arrested at any time by US agents… I am not free and I’m not allowed to contact my family. If something happens and I do not return home alive, the US government will be responsible,” he said.

“I ask Iranian officials and organisations that defend human rights to raise pressure on the US government for my release and return to my country,” the man said, adding he has not “betrayed” Iran.

A US official on Tuesday dismissed the allegations in the Iranian broadcast. Amiri disappeared in June 2009 after arriving in Saudi Arabia for a pilgrimage. Iran accused US agents of abducting him with the help of Saudi intelligence services.

ABC news in the United States reported in March that Amiri had defected and was working with the CIA. US officials have rejected these allegations.