Biden to nudge Iraq on sluggish efforts to form a government

Los Angeles Times: As the U.S. prepares to exit Iraq, the vice president arrives in Baghdad for talks with election front-runners Nouri Maliki and Iyad Allawi. He expresses optimism.

As the U.S. prepares to exit Iraq, the vice president arrives in Baghdad for talks with election front-runners Nouri Maliki and Iyad Allawi. He expresses optimism. 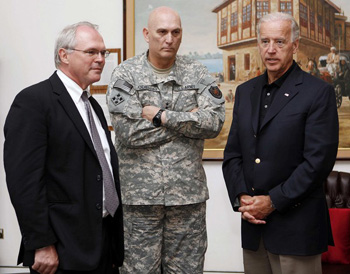 Vice President Joe Biden, the White House point man on Iraq policy, arrived in Baghdad on Saturday for meetings with the two front-runners in slow-moving negotiations to lead the Iraqi government as U.S. troops pull out.

Iraqis voted on March 7, and there are widespread expectations that naming a prime minister and forming a new government could take many more weeks. In the meantime, a sense of uncertainty pervades the country and U.S. troops are in the process of drawing down to a total of 50,000 by the end of August. All U.S. troops are scheduled to leave by the end of 2011.

Biden, on his fourth trip to Iraq as vice president, will meet separately on Sunday with Prime Minister Nouri Maliki, a Shiite Islamist, and secular politician Iyad Allawi, whose alliance won the most seats in the next parliament.

The two leaders’ blocs have begun talks on forming a government, but it remains unclear whether they can bridge the gaps between them. If the government does not include Allawi’s allies, Iraqi officials worry that the country’s Sunni minority, which helped fuel the country’s insurgency, could return to violence.

Before a briefing from U.S. Ambassador Christopher Hill and Gen. Ray Odierno, the commander of U.S. forces in Iraq, Biden said he was optimistic about the formation of a government and compared the negotiations to postelection bargaining in Western European countries.

“The country is in the position where, in one sense it looks … most difficult putting the government together,” Biden said. “In another sense this is local politics. This is not a lot different from any other government.”

Biden’s visit over the Fourth of July weekend comes as some Iraqi officials have complained about a drift or lack of purpose in American policy on Iraq.

With the drawdown of U.S. forces, the United States and Iraq have sought to redefine their relationship. At times, Iraqi officials and politicians have complained that the U.S. Embassy and White House have become too distant. They argue that a more engaged approach is still required in the country that U.S.-led forces invaded seven years ago.

An administration official said that in his meetings with Iraqi officials, Biden would stress that the U.S. has a long-term commitment to the country. “As our military presence ramps down, our diplomatic, political and economic engagement is ramping up,” the official said. “There is a major transition underway.”

The official, who spoke on condition of anonymity, said Biden was here to listen and to offer help only if asked. “There is no American plan,” he said. “This is up to Iraqis.”

The official rejected the notion that failure to form a government before the end of August could lead to greater instability.

“The relationship between that [withdrawal] and the existence or lack of a permanent government really isn’t there for a number of reasons. First of all, there is a caretaker government in place and it is doing exactly that. It is taking care of business,” the administration official said. “Whether or not there is a government doesn’t change the plans we have to end the combat mission and be down to 50,000 [troops].”

Upon arrival, the vice president headed for a meeting with the U.N. representative to Iraq, Ad Melkhert. Before rushing off to see Melkhert, Biden had a brief visit on the tarmac with three prominent U.S. senators who also were visiting Iraq: Republicans John McCain of Arizona and Lindsey Graham of South Carolina, and independent Joe Lieberman of Connecticut.

By Mehdi The Atomic Energy Organization of Iran (AEOI)...

Annan appeals to Iran for positive response to nuclear deal