Iran to pay for new babies to boost population 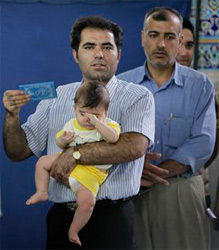 The new government initiative will pay families for every new child and deposit money into the newborn’s bank account until they reach 18, effectively rolling back years of efforts to boost the economy by reducing the country’s once runaway population growth.

“Those who raise idea of family planning, they are thinking in the realm of the secular world,” Ahmadinejad said during the inauguration ceremony.

The plan is part of Ahmadinejad’s stated commitment to further increase Iran’s population, which is already estimated at 75 million. He has previously said the country could support up to 150 million.

The program would be especially attractive to the lower income segments of the population formed the backbone of Ahmadinejad’s support in the 2005 and 2009 elections.

Throughout his tenure, the president has promoted populist policies in Iran, where 10 million people are estimated to live under the poverty line.

It is unclear, however, where the funds would come from as the government is already having trouble paying for basic infrastructure projects.

It was reversed after the 1979 Islamic revolution only to be brought back 10 years later when the population ballooned and the economy faltered.

Throughout the 1990s, Iran reduced population growth by encouraging men and women to use free or inexpensive contraceptives, as well as vasectomies. The government brought down the country’s population growth rate from its 1986 height of 3.9 percent to just 1.6 percent in 2006.

Ahmadinejad caused public outcry, however, when shortly after he was elected in 2005 he said two children per family were not enough and urged Iranians to have more.

Under the new plan each child born in the current Iranian year, which began March 21, will receive a deposit of $950 in a government bank account. They will then continue to receive another $95 every year until they reach 18. Parents will also be expected to pay matching funds into the accounts.

Under the initiative’s rules children can withdraw the money at the age of 20 and use it for education, marriage, health and housing.

Iran’s official unemployment rate is about 10 percent, but estimates say there are 3 million unemployed people of working age in the country.

Reuters: The U.N. atomic watchdog will press its demand...