Iran: Octopus Paul is a symbol of Western decadence and decay

Daily Mirror: His incredible on-the-ball World Cup predictions made Paul the octopus a soccer sensation. But psychic Paul has left others feeling as sick as a parrot – especially Iran’s Mahmoud Ahmadinejad. 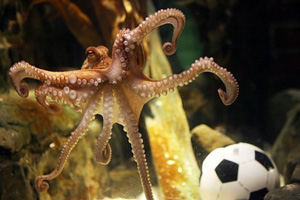 His incredible on-the-ball World Cup predictions made Paul the octopus a soccer sensation.

Thanks to the celebrated oracle, those who backed Spain to win were squids in.

But psychic Paul has left others feeling as sick as a parrot – especially Iran’s Mahmoud Ahmadinejad.

Now the excitable president, whose country failed to qualify for the tournament and is ranked 60th in the world by FIFA, has cried foul. Ahmadinejad has condemned Paul as a symbol of decadence, decay and all that is wrong with society in the West.

During a speech in Tehran at the weekend, the Iranian leader red carded the multi-armed footie forecaster for spreading “western propaganda and superstition”. Referring to Paul, he said: “Those who believe in this type of thing cannot be the leaders of the global nations that aspire, like Iran, to human perfection, basing themselves in the love of all sacred values.”

Paul, who has legged it back to his tank in Oberhausen since correctly predicting all seven of Germany’s World Cup results – as well as Holland’s defeat in the final by Spain – was unavailable for comment.

Iran, currently ranked 60th by FIFA, failed to make it to South Africa after a controversial 0-0 draw between Saudi Arabia and North Korea

AFP: Iran said on Sunday its nuclear standoff with...