AFP: Iran will mass produce replicas of the Bladerunner 51, often described as the world’s fastest boat, and equip them with weapons to be deployed in the Gulf, a top commander said Tuesday. 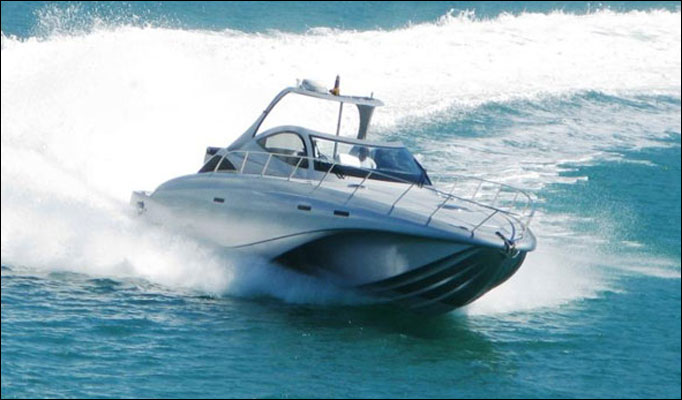 TEHRAN, August 10, 2010 (AFP) – Iran will mass produce replicas of the Bladerunner 51, often described as the world’s fastest boat, and equip them with weapons to be deployed in the Gulf, a top commander said Tuesday.

“The Bladerunner is a British ship that holds the world speed record. We got a copy (on which) we made some changes so it can launch missiles and torpedoes,” said General Ali Fadavi of the Revolutionary Guards’s navy.

“The Revolutionary Guards will be equipped with many” of them within a year, he said at a ceremony marking the delivery of 12 other speed boats equipped with missiles and torpedoes to the Guards.

The Bladerunner 51, weighing 16 tonnes and 15.5 metres (45 feet) long is manufactured at the ICE Marine shipyard in Britain and can reach a maximum speed of 65 knots.

The boat, powered by two 1,000-horsepower engines, reportedly conducted in 2005 a tour of the British Isles in a little more than 27 hours at an average speed of 63 knots.

General Fadavi did not fully explain how Iran managed to get a copy of the boat, only saying it had come “via South Africa.”

He said a US ship had tried to intercept the boat before it entered Iranian waters 18 months ago, but added Iranian forces protected it and ensured its arrival.

Fadavi further warned that “in case of a conflict we will be everywhere and nowhere to face the enemies,” recalling that Iran controls the strategic Strait of Hormuz through which 40 percent of world’s seaborne oil supplies pass.

In recent weeks Iranian military officials have stepped up their warnings against any attack on the Islamic republic.

The United States and Israel have not ruled out a military strike against Iran to stop its controversial nuclear programme.

Iranian leaders have also repeatedly warned Tehran would retaliate against any attempt by Western countries to inspect its vessels, as set out in the latest sanctions the UN Security Council adopted on June 9.

On Sunday, Iran took delivery of four new mini-submarines of the home-produced Ghadir class. Weighing 120 tonnes, the “stealth” submarines are aimed at operations in shallow waters, notably in the Gulf.