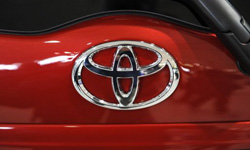 The world’s largest carmaker said in a statement it has halted auto shipments to Iran since early June, “considering the international environment”.

“Our company will continue to closely monitor the international situation,” it said without elaborating.

Toyota Motor’s auto shipments to Iran sharply declined to about 250 Land Cruiser four-wheel-drive and other vehicles in 2009, from 4,000 units in 2008. Toyota has exported 220 cars to the country so far this year.

The Nikkei business daily reported that Toyota’s exports to Iran may not violate US sanctions, but the company had decided to stop shipments because “firms continuing to deal with Iran have come under scrutiny from the US government”.

North America is a key market for Toyota, with sales in the United States exceeding those in Japan. Toyota’s North American sales jumped nearly 40 percent on year in the April-June quarter.

In the United States, any business breaching the sanctions faces restricted access to the American market. Washington and several other nations fear Iran is developing a nuclear arsenal under cover of its energy programme, which Tehran denies.

Earlier this month Japan imposed sanctions against Iran over its contentious nuclear programme in line with a UN resolution and said it plans to announce additional punitive measures.

The measures include an asset freeze on 40 Iranian entities and one individual suspected of being involved in nuclear and missile development.

The UN Security Council in June slapped its fourth set of sanctions on Iran over its refusal to halt its uranium enrichment work.

The United States, European Union, Canada and Australia have also announced additional sanctions, which have been opposed by Russia and China, now Iran’s closest trading partner, with major energy interests in the country.

Other Japanese companies are also carefully handling exports to Iran, although unlike Toyota, they have yet to introduce a full suspension.

A spokesman for Mitsubishi Heavy Industries said: “We have been strictly scrutinising shipments to Iran and will do so more strictly from now on, in line with new sanctions.”

Nippon Steel and JFE Holdings are conducting client-screening and checking end-usage of orders from Iran while consulting the trade ministry to check if there is any problem with “security and trade management”.

MEK Support Outside of Iran

By Pooya Stone The Iranian Government often likes to...

Freedom Hanging from a Rope in Iran

Despite an outcry from the international community and several...