Wall Street Journal: Turkey’s president questioned the effectiveness of sanctions as a tool to curb Tehran’s nuclear ambitions and indicated his country’s relations with Israel won’t improve until the Jewish state apologizes for its deadly May raid on a flotilla trying to reach Gaza.

By GORDON FAIRCLOUGH And REBECCA BLUMENSTEIN 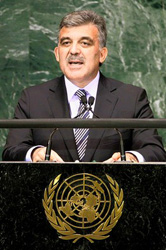 NEW YORK—Turkey’s president questioned the effectiveness of sanctions as a tool to curb Tehran’s nuclear ambitions and indicated his country’s relations with Israel won’t improve until the Jewish state apologizes for its deadly May raid on a flotilla trying to reach Gaza.

President Abdullah Gul said Monday that Turkey is determined to prevent the spread of nuclear weapons and is pushing for a diplomatic solution to the Iranian nuclear standoff. Turkey “is engaged in very active cooperation both visible and invisible” with the U.S. and others in an effort to reach a deal that would prevent Iran from developing an atomic arsenal, he told The Wall Street Journal.

In an interview on the sidelines of the United Nations’ annual General Assembly meeting here, Mr. Gul said Turkey would adhere to sanctions imposed by the U.N. on Iran. But, he said, punitive economic measures against Iran are “not productive.” In general, he said, such steps risk breeding “hatred and hostility among the people.”

Turkey has sought to keep good relations with neighboring countries in the interest of fostering the growth of the Turkish economy, which has been expanding rapidly. In May, Ankara worked on a deal under which Iran would ship part of its uranium stockpile to Turkey to be further enriched and turned into reactor fuel and medical isotopes.

That agreement failed to satisfy the U.S. and European countries that had tried to negotiate a stricter pact with Tehran, and in June, the U.N. Security Council imposed new economic sanctions on Iran. Turkey and Brazil voted against the move.

“We do not take the nuclear issue lightly,” said Mr. Gul. “We would be the first ones under threat” if Iran had nuclear arms. At the same time, Turkey is intent on preserving peace in the region. “If you don’t have stability, you can’t have economic cooperation.”

Turkey shares borders with both Iraq and Iran. The U.S.-led war in Iraq, which resulted in political instability and economic dislocation, came “at a cost to Turkey,” Mr. Gul said. “We would not want to see the same kind of problem” in Iran, he said.

Mr. Gul also said Israel’s conduct in May, when Israeli forces boarded a ship attempting to break its embargo on the Gaza strip and killed nine people, is “not something we can disregard.” He said Israel needed to be dealt with according to international law. “Then, we can speak of normalization,” Mr. Gul said.

“The mistake must be admitted, an apology must be expressed and compensation must be paid,” Mr. Gul said. “We are not happy with the way our relations stand at the moment. But it’s not our doing.”

Mr. Gul disputed Israeli President Shimon Peres’s assertion Monday that the Turkish leader had scrapped a planned meeting because of Mr. Peres’s refusal to apologize for the raid. “I did not cancel any meeting,” he said, adding that there had been no agreed program.

The Turkish president dismissed the view of some critics who say Turkey is turning away from the West. Mr. Gul said Turkey’s vote this month to amend the country’s constitution, promulgated after a military coup in 1980, was part of Turkey’s effort to strengthen its democratic institutions as it seeks to join the European Union.

“Turkey is a country that is working toward full membership in the EU,” said Mr. Gul. “Turkey’s direction, Turkey’s orientation, is very clear.”