CNN: They journeyed to New York from faraway places, they said, to give voice to those who are silenced in their homeland. 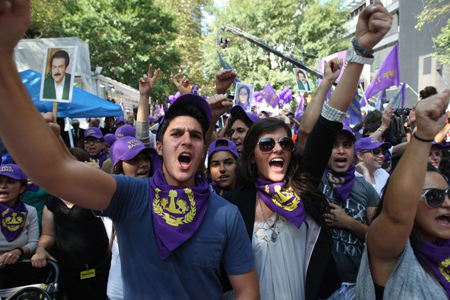 New York (CNN) — They journeyed to New York from faraway places, they said, to give voice to those who are silenced in their homeland.

They wanted to stand their ground before the United Nations, where Mahmoud Ahmadinejad was addressing the General Assembly.They called the Iranian president a terrorist. And a murderer.

“We are ready for change,” Moslem Filabi, a former Iranian wrestling champion, told the protesters gathered across the street from the United Nations at Dag Hammarskjold Plaza.

One of them was Fateh Khazri, who said her father was imprisoned in Iran for alleged ties to dissidents. She had traveled from London, England, to state her opinion.

Mahyar Harsini came from Cologne, Germany. “People in our country, they don’t have a voice,” Harsini said. “We are here to talk for them because they are not able to.”

The protest organizers, a coalition of Iranian-American groups who have gathered each time Ahmadinejad has visited the United Nations, are broadcasting the protest over satellite television and on the internet, allowing people in Iran to see the opposition to the Iranian regime.

“How can America let such a person into this place?” wondered Kamal Bayog of Luxembourg. “He must be expelled from the U.N.”

Some demonstrators wore hats embroidered with the slogan, “Viva Rajavi” and carried pictures of Maryam Rajavi, leader of the National Council of Resistance of Iran, who lives in exile.

Purple flags and balloons supporting Rajavi’s opposition floated overhead as she addressed the rally via satellite from Paris, France.

“I urge the U.N. to condemn the Iranian regime and their crimes, the worst humanitarian crimes,” she said. “Those of you here are the brave ones representing Iran. Ahmadinejad is the enemy of Iran.”

Other demonstrators wore bloodied prison uniforms and nooses around their necks, symbols of the repression under the Islamic regime, they said. One woman sat surrounded by stones, used in Iran as a method of execution.

Former New York Mayor Rudolph Giuliani also addressed the crowd. “You and your cause,” he said, “are the best hope for Iran.”

CNN: The female police officer who killed a U.S....