Washington Post: The Iranian capital is experiencing what officials say is the worst pollution in its history, prompting the government to shutter offices and consider placing air purifiers across the city as it seeks to combat the brown blanket of smog. 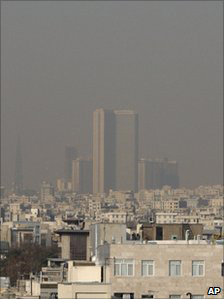 TEHRAN – The Iranian capital is experiencing what officials say is the worst pollution in its history, prompting the government to shutter offices and consider placing air purifiers across the city as it seeks to combat the brown blanket of smog.

The weeks of heavy pollution are taking a serious toll on residents of Tehran. Hospitals are reporting a strong increase in patients with breathing problems. Government offices have been closed for three days in the past three weeks, and schools and universities have been shuttered for at least six days.

Tightly embraced by one of the highest mountain ranges in the Middle East and filled with millions of cars, Tehran has grappled for decades with air pollution. But this year, as the capital and other Iranian cities struggle with extreme pollution, many here are blaming a new, locally produced form of gasoline.

The product is the result of an emergency plan to prevent fuel shortages after the U.S. Congress in July approved sanctions that punish foreign firms that provide gasoline to Iran.

The Islamic republic’s leaders have lauded their oil industry for swiftly supplying the market with its own mixes of high-octane fuel, which is manufactured in petrochemical plants rather than refineries.

But the brew is now seen by many as the main reason for the unprecedented air pollution levels in Tehran, Isfahan, a city in central Iran, and other large population centers.

“This fuel is our political ace” against the sanctions, the Ayandeh Web site, which is critical of the government, said Monday. “But it is of low quality and polluting.”

More than 80 percent of air pollution here is attributable to the 3.5 million automobiles that ply the almost permanently clogged streets of the capital, according to research carried out by the city of Tehran, the English-language state television channel Press TV reported.

Conditions started to worsen two weeks ago, when the weather pattern stagnated and the rain and wind that usually dominate Tehran’s autumn were replaced with a dry Indian summer.

With the weather not expected to change for the foreseeable future, at least 10 crop duster planes were scheduled to fly over the capital Monday, dumping water and, officials hope, creating wind channels through the smog that would carry the pollution away, the official Islamic Republic News Agency reported.

The government has also proposed installing 100 air purifiers in the most polluted places in the city.

But experts say the purifiers work only in secluded spaces and would be ineffective; the exhaust fumes of the small planes, they say, will add to the problem instead of reducing it.

Mohammad-Reza Shababi’s 3-year-old daughter, Maneli, came down with a cold that quickly turned into a severe windpipe infection. “The doctors said the cold was intensified by the extreme pollution,” Shababi said.

“I have taken a two-week leave from my work and barely leave the house,” said Rita Salimi, a 30-year-old woman in the last weeks of a pregnancy. “When I turn off the air purifier in our apartment, headaches start almost immediately. I just pray our baby is safe.”

Despite the pollution crisis, the Iranian government has boasted in recent months that the country has started exporting the gasoline it is producing to neighboring countries. State television showed trucks crossing the border with Iraq to deliver the fuel.

The United States has called for more sanctions if talks on Iran’s nuclear program, which began Monday in Geneva, are not successful.

“The arrow of these sanctions is hitting my daughter’s windpipe,” Shababi said. “What has she done? Both our leaders and the U.S. should think of the consequences of their acts.”

Chicago Tribune: The United States is ready to respond...

The Guardian: Iran has become the single biggest donor...