Iran Focus: Tehran/London, Dec. 28 – An Iranian political prisoner, Ali Saremi, was hanged in Tehran’s notorious Evin Prison on Tuesday on the charge of “Moharebeh”, or “waging war against God”. 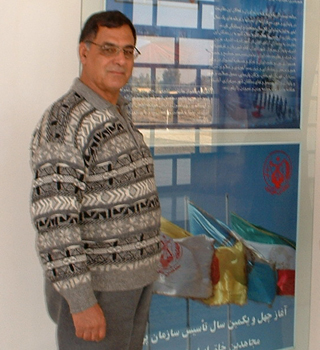 Tehran/London, Dec. 28 – An Iranian political prisoner, Ali Saremi, was hanged in Tehran’s notorious Evin Prison on Tuesday on the charge of “Moharebeh”, or “waging war against God”.

Saremi, 63, was a member of the People’s Mojahedin Organisation of Iran (PMOI), according to a statement from the Tehran Prosecutor’s Office. He had been convicted of carrying out publicity against the theocratic regime.

Saremi had been arrested on four occasions since the 1979 revolution and incarcerated for a total of 24 years. He was last arrested in August 2007 during a ceremony marking the anniversary of the 1988 massacre of political prisoners and sentenced to death following anti-government protests in December 2009.

Maryam Rajavi, head of the opposition coalition National Council of Resistance of Iran (NCRI), said in a statement that Saremi’s execution highlighted the regime’s “fear of the PMOI and the Iranian Resistance” and was an attempt to take revenge following the “repeated failures of its plots” against PMOI members based in Camp Ashraf, Iraq. “This great crime only reflects the regime’s inability and frustration in the face of the resolute Iranian youths and members of the PMOI who are determined to overthrow the clerical rule and establish freedom and the rule of people in Iran”, she said.

A second NCRI statement said authorities had arrested Saremi’s wife, daughter and sister and others who protested his execution outside the prison. Saremi’s son Akbar is a member of the PMOI in Camp Ashraf. Prior to his arrest in 2007, Ali Saremi had travelled to Camp Ashraf to visit his son.

The United Kingdom “strongly condemned” the execution of Saremi and Ali Akbar Siyadat, who was charged with spying for Israel.

“We are deeply concerned by reports of the execution of Ali Saremi and Ali Akbar Siyadat this morning. The UK strongly condemns these executions and opposes the death penalty in all circumstances”, a Foreign Office spokesperson told Iran Focus.

The Friends of a Free Iran Intergroup at the European Parliament also condemned Saremi’s execution, calling it, “another crime for which the mullahs will be held to account when freedom is finally restored to that beleaguered nation”.